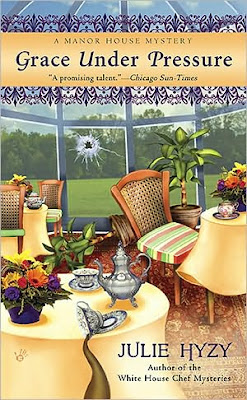 
Everyone wants a piece of millionaire Bennett Marshfield, owner of Marshfield Manor, but now it's up to a new curator Grace Wheaton and handsome groundskeeper Jack Embers to protect dear old Marshfield. But to do this, they'll have to investigate a botched Ponzi scheme, some torrid Wheaton family secrets-and sour grapes out for revenge.
Reviews:

Launching the Manor of Murder series with plenty of thrills and laughs, Hyzy (the White House Chef mysteries) creates the well-researched and believable estate of Marshfield Manor, part mansion and part museum. As assistant curator Grace Wheaton is handling a loud disturbance in the tea room, gunshots ring out from the fourth floor. Head curator Abe is killed, and the murderer mysteriously vanishes from the study. When billionaire Bennett Marshfield reveals that he's been receiving threatening letters from someone who might be the killer, Grace undertakes an amateur investigation, which includes looking into a local Ponzi scheme and her own family secrets. Well-drawn characters like busybody secretary Frances, handsome landscape architect Jack, and stalking wannabe PI Ronny are supported by lively subplots, laying series groundwork to rival Marshfield Manor's own elaborate structure. Publishers Weekly (June)

Jump into this one and feel yourself longing for the release of the next. Grace is a strong, intelligent, and sensitive sleuth that will keep you trailing behind her to see what she will uncover next. Each page will bring a new surprise, a different twist, and a view into Julie Hyzy’s excellent writing style. A must read for this summer! - 4 1/2 Stars, Reviewed by Kathy Fisher, Romance Readers Connection
-----
Buy at Centuries and Sleuths
Buy at BN.com
Submitted by Heather Webber