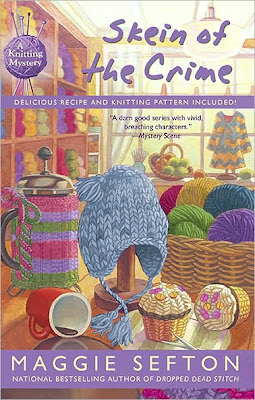 What it’s about:
The newest installment in the series, with knitting patterns and recipes included!
Fall has come to Fort Connor, Colorado, and the cool air has inspired the knitters at the House of Lambspun to start on their hats and mittens. It's also brought an influx of students to the university town-and into the shop for knitting classes. Kelly Flynn is happy to teach them the tricks of the trade-until one of them is found dead on the river trail near Kelly's house. Compelled to investigate, Kelly finds herself following a path that twists more easily than the yarn with which she knits. Knowing the killer could be close, Kelly must work fast to unravel the skein of this crime.
Reviews:
"Sefton’s prose inspires on two levels: knitting and baking. Kelly Flynn and her fellow “yarnies” will make readers long for their own group of crafty friends, and even non-coffee drinkers will drool over the treats described in the latest Knitting Mystery. Even for a newcomer to the series, this is a satisfying, cozy read."
4 Stars
Rhomylly Forbes, RT Book Reviews
"Maggie Sefton not only tells a good story about people who you come to know and care about, she also deals with some current social issues as the basis for the plot. She also doesn't hold back from giving a good view of the reality of the situation and what can and can't be done about it."
- Review by Gayle Surrette
Gumshoe Reviews
Buy a copy:
Old Firehouse Books
BN.com
Submitted by Heather Webber