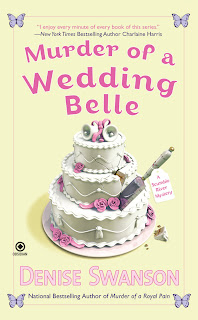 Hi! My name is Skye Denison, and like my biographer, Denise Swanson, I’m a school psychologist. It had been a hard school year—don’t ever volunteer to help with a Halloween fundraiser sponsored by Prom Moms—and you can imagine how much I was looking forward to June. That is, until my California cousin decided to have her over-the-top platinum wedding in my hometown. Scumble River, Illinois was so not ready for living buffets and wedding cakes that cost more than the cars most people around here drive. And it only got worse when the bridal consultant was murdered.

Some of my critics have complained that I don’t have a backbone because, in the past, I’ve let my mother guilt me into doing stuff I don’t want to do. But I’ll bet a lot of you have mothers that know how to play their daughters like tightly-strung violins, and I’ve gotten much better at saying no to May. Unfortunately, this time my ailing eighty-six-year-old grandmother was the one using emotional blackmail on me. Really, who can say no to that? Which is how I ended up not only being my cousin Riley’s maid of honor, but also her fill-in wedding planner.

Still, I might have been able to handle the wedding without too much stress, if I hadn’t also been helping solve the murder—I’ve been acting as a psychological consultant for a couple of years now. But I think the straw that really broke the camel’s back was the engagement ring I was carrying in my purse—that and the fact that my ex-boyfriend chose this time to declare his undying love. With all that drama, even chocolate and new shoes weren’t enough to keep me calm.
Submitted by Denise