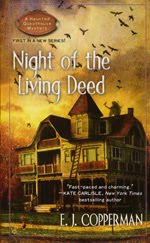 by Maxie Malone
From NIGHT OF THE LIVING DEED, by E.J. Copperman
Here's what I can tell you about being dead: It's really boring.
I haven't met that many people in the year or so since somebody poisoned me and Paul Harrison, the less-than-perfect private detective I hired to keep me from dying (luckily, he didn't live to cash the check!), but everyone I've spoken to since then asks the same question: What happens to you after you die?
Basically, you float around in the air. And most people can't see or hear you. In other words, it's a first-class drag.
See, I am... was... a pretty active girl back when I was breathing. I rode a Harley, went to art school, learned how to throw a knife, bungee jumped off bridges and became an expert archer. And that was just in a weekend when I was 23. I got to live five more whole years after that.
Paul and I "woke up," I guess you'd call it, in this shell of a massive Victorian house I was going to renovate and flip--that is, sell for a profit--until a couple of things slowed me down. First, the bottom dropped out of the real estate market, even on the Jersey Shore, and second, Paul and I were poisoned, putting a real crimp in my redecoration plans.
But we're stuck. We can't leave the house and the grounds surrounding it. No, I don't know why. There's no AAA guide to being dead. There isn't even "Death For Dummies," although I've gotten to know a few ghosts who could use the help.
Listen, I'm not a difficult person. No, really. But getting murdered puts a real charge into your desire for revenge, and I have this problem: I don't know who killed us. So we're putting a little friendly persuasion into the ear of the dim bulb who bought the house after me, this Alison Kerby (she posted here last month, you might recall, and said some really hurtful things about me, like that I was a pain in the butt).
Okay, so Alison isn't THAT bad, but she doesn't really get it about us being dead and how much we hate it. On the plus side, she did bring her daughter Melissa along with her when she bought this place, and Melissa is a doll and a half. She's worth putting up with Alison. Mostly.
I'm going to have to bail now, because Alison's looking for her laptop. She's been getting the same kind of threatening emails I used to get: "Get out of the house, or you won't be alive in a month." It's possible I didn't take those threats literally enough.
Just keep this in mind if you're wondering what it's like to be dead--posting here was probably the highlight of my month. After that, it's just more floating around in space.
Unless Alison helps us find out who killed Paul and me. Stay tuned.
Submitted by E.J. Copperman