Have I got a resolution for him and her 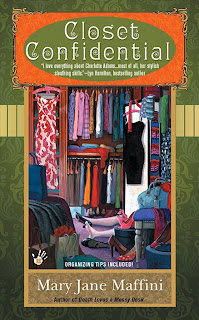 
Jack! Open the door. It’s just me, Charlotte. What do you mean, Charlotte who? Um, just your best friend and tenant and maybe even more. I’m only trying to help, and I don’t know why you won’t ….

Oh hello. I didn’t see you there. What? Oh. I’m on at Killer Characters already? How embarrassing! I’m usually on top of these things, but my playful dogs have hidden my agenda, probably because there’s a vet visit coming up. Now you’re probably wondering why I am banging on Jack Reilly’s door and more to the point why he won’t open it. If you haven’t met me, this would be a good time for me to mention that I live upstairs and I run Organized for Success. That’s just in case you need anything decluttered, sorted out or set up.

I love January, when the year ahead is a clean slate and anything’s possible if you just plan for it. I find New Year’s Resolutions can help make good things happen, so naturally, I love them too.

I was just trying to help Jack with his New Year’s Resolutions, although, of course, he doesn’t actually have any and so he’s avoiding me. He should have some though, starting with decluttering his apartment and maybe even getting some furniture. He is the only person I know who keeps spare bike parts in his oven. Also, it would be a great idea for him to expand his wardrobe beyond those cargo shorts and Hawaiian shirts. Aside from those small quirks, he is the best guy in the world.

I have also volunteered to help my friend Margaret set up a few new procedures in her law office and offered to organize my friend Sally’s chaotic playroom (four kids under four). You can’t sit down in her house without impaling yourself on some bright piece of hard plastic. But for some reason, neither of them is answering the phone. I wouldn’t bother trying to suggest any improvements to my friend (and occasional enemy) Sgt. Pepper Monahan. I will just resolve stay out of her way and that goes for the rest of the police force too.

My rescued miniature dachshunds should be learning a few tricks to help them in their Therapy Dog work, but for some reason they are hiding under my bed, just out of reach, even with the broom.

Never mind, I still love New Year’s Resolutions and mine were made in plenty of time for the New Year. I know that to succeed, a goal should be measurable, achievable and have a specific date . Although I don’t have a problem with clutter, there are some areas in my life that could stand a bit of improvement. I need to find some new business opportunities for Organized for Success, as the economy hasn’t been kind to most small businesses. My first resolution was to develop five related time management workshops by Feb 1. Of course, I’ve already managed to do that. My author loved my ideas and has incorporated them into our next book The Busy Woman’s Guide to Murder which comes out April 5th. You’d think that she’d write me a check every now and then to show her gratitude, but noooo.

Since this is an honest forum, I was going to resolve not to eat quite so much Ben & Jerry’s New York Super Fudge Chunk out of the container, but as I can still zipper my pants and button my blouses, I think this resolution is best put on hold for another year.

Even so, you can’t live on ice cream, so I have resolved to learn to cook a second recipe. That’s right, even though I am getting pretty good at making that stir fry. Therefore:

Master basic omelet recipe by April 1st. This is not a joke.

I do need to get more exercise (the kind that doesn’t include fleeing from murderers, falling out of trees, or jumping to conclusions). Therefore: Increase walking time with Truffle and Sweet Marie. Pick up thirteen pound dogs when they get tired to speed process and eliminate the need to do free weight work. Anyone who knows Truffle and Sweet Marie realizes that their independent natures make it impossible for this resolution to be specific, measurable or have a deadline.

Finally, and most bothersome, on occasions when they were taking my calls, most of my friends have suggested that being less bossy would be a good resolution for me. As I’m not really sure what they’re getting at, I’m not clear on how I could make that happen. Do you have any suggestions?

Mary Jane Maffini is the author of the Charlotte Adams series, the Camilla MacPhee mysteries and the Fiona Silk comic capers. Visit her at www.maryjanemaffini.com and every third Saturday at www.mysteryloverskitchen.com.