Whom do you trust? By Anastasia Pollack ...from Lois Winston’s Assault With a Deadly Glue Gun

Thinking back to my marriage vows, I remember agreeing to have and to hold, to love and to cherish for better or for worse, for richer or for poorer, in sickness and in health. Nowhere in those vows is there any mention of trust. Ay, there’s the rub, as Ralph, my Shakespeare quoting parrot might squawk. Because blindly trusting my recently and not-so-dearly-departed husband is why I now have a loan shark demanding fifty thousand dollars that I don’t have. 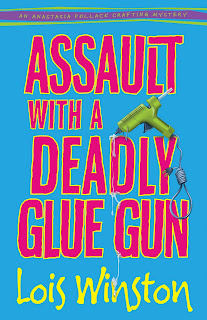 Let me back up a bit. Until recently, my life was typically suburban middle class with two kids and two working parents. Karl worked as an auto parts sales rep, and I’m the crafts editor at a women’s magazine. Because we both worked full time, Karl and I had divvyed up the household and parental responsibilities. And because I’m totally right-brained and never met a math problem that didn’t send me into a state of hyperventilation, Karl handled the family finances. With my blessing.

Karl handled the finances all right. He handled them down into negative territory so low that he’d dug us into a pit halfway to China. Only I didn’t know that. Not until he dropped dead one day. In Las Vegas. Trusting wife -- moi -- thought he was at a sales meeting in Harrisburg, PA.

Not only had Karl wiped us out -- raiding our savings, retirement accounts, and our kids’ college funds -- he’d cashed in his life insurance policy, taken a second mortgage on the house and gotten himself into hock with a loan shark. I inherited all the debt -- and the loan shark.

And if that weren’t enough, someone’s framing me for a coworker’s murder.

So not only do I need to clear my name and get the loan shark out of my life, I need to find some way to make extra money. That’s where Lois Winston comes in. You see, she’s telling my story in her new Anastasia Pollack Crafting Mysteries, and she’s agreed to split the advances and royalties with me. The more books she sells, the faster I climb out of debt.

Lois also managed to twist a few arms and got the other editors at my magazine to blog with me at Killer Crafts & Crafty Killers. It’s the online complement to our newsstand issues and features all sorts of goodies like crafts project, recipes, decorating tips, and more. Plus, we host guest authors on what we call Book Club Friday. Stop by if you get a chance. Most of our guests give away copies of their books. You can find Killer Crafts & Crafty Killers.

I blame a lot of my current predicament on my own blind trust. Had I paid more attention to family finances, I might not be where I am today. I’ve learned my lesson, though. I’ll never again trust any man, not even that to-die-for stud who’s now renting the apartment over my garage.

Have you ever been suckered by someone you thought completely trustworthy? How did you handle the fallout when you discovered the truth?

Award-winning author Lois Winston writes the Anastasia Pollack Crafting Mysteries. Assault With a Deadly Glue Gun debuted in January, garnering starred reviews from both Publishers Weekly and Booklist. Kirkus Reviews called the book, “North Jersey’s more mature answer to Stephanie Plum.” Death By Killer Mop Doll, the second book in the series will be out in January 2012. Visit Lois at her website -- http://www.loiswinston.com -- and Anastasia at the Killer Crafts & Crafty Killers blog -- http://www.anastasiapollack.blogspot.com. You can also follow Anastasia and Lois on Twitter @anasleuth.
Submitted by Misa