My name is Violet Dupree, and I am a secondary character. I’ll never get a story of my own, because I have so-called issues. Not that the heroine of a romance novel can’t have issues, but mine are the wrong kind (or so the rules about heroines say). Rules? Says who?
For one thing, I’m promiscuous, but before you judge me harshly, listen for a bit. I didn’t choose to be a bedswerver. (Yes, it’s a real word, and isn’t it a great one?) I’m a hereditary vampire. (I’m not dead or undead. Ick!) I was born with a vampire gene and sprouted my fangs at puberty. I have a naturally voracious appetite for sex and a taste for blood. (No, I don’t drink blood. I just taste it, because it enhances the sexual experience. I’m not a savage like some people.) Vampires don’t carry STDs, so sex with me is safe, at least in that way. LOL.

I’m also irresistible. Not that heroines can’t be irresistible – my sister, Ophelia, got her own story – but apparently it’s my way of handling my vampire nature that prevents me from being a romantic heroine. Men can be a real problem when one is fatally attractive, but since I maintain several boyfriends at any given time, they all know better than to expect faithfulness. (And if they get jealous, they can beat each other up. Shrug. Not my problem.) Ophelia, the heroine of Sunrise in a Garden of Love & Evil, tried sticking to one boyfriend at a time and ended up with one crazed or violent guy after another, after which she swore off men. I love Ophelia dearly, but I firmly maintain that for a vampire, celibacy is not a solution. Nor is working yourself to exhaustion (although her landscaping is superb!), eating raw meat (including nutria – shudder) or having a vast collection of sex toys. For temporary relief, sure, but for two whole years? No, no, no!

The alternative to multiple boyfriends is hooking up with a tough guy. Rose, the heroine of Tastes of Love and Evil, lived with a mob boss for years. He put her through school, and now she designs scrumptious fabrics and costumes. My daddy was a mobster and I sure do miss him, but you don’t learn a thing about controlling your vampire temper in that sort of company (as Rose proved). I spent years learning to channel my anger, and if I blow up now and then and break a vase or figurine, I always clean up after myself. That seems pretty heroic to me.
Not only that, I don’t abuse my power. I don’t drain men and leave them for dead when I’m tired of them. (Like my worst enemy, Titania. You don’t want to know more about her. Sigh. OK, you bloodthirsty freak. She got to be the villain in Tastes of Love and Evil. She’s such an attention hog.) I abhor violence and only ask for help from the Bayou Gavotte underworld if there’s simply no alternative. You don’t think I’d resort to using my fangs for that, do you? Heaven forbid. They’re an instrument of pleasure, darling!

I own Blood and Velvet, the premier vampire club in Bayou Gavotte. We offer the safest possible experience – no whips and chains, no one underage, and no spectator sex in back rooms like some places I could name – and although vampire wannabes tend to get overexcited and bite their dates, our emergency care is first rate.


Most heroic of all, I don’t try to convince my daughter, Zelda, to take after me. If she wants to follow in Ophelia’s footsteps, I wish her luck, and I will always provide a shoulder to cry on. Zelda deserves to be a heroine. She’s pretty amazing, if I may say so myself, and regardless of what people may think, she didn’t inherit all of it from her father (about whom I refuse to say anything else. I may have learned to channel my anger, but some feats are simply not possible).

I don’t care what you say:  I’m not trying to hide my vulnerability, and I am definitely not using sex to compensate for love. I’m being true to my vampire nature, and that’s all there is to it. And now I’m off to break a vase! 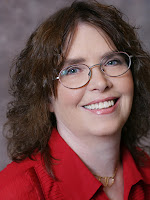 Barbara Monajem wrote her first story in third grade about apple tree gnomes. After dabbling in neighborhood musicals and teen melodrama, she published a middle-grade fantasy when her children were young. Now her kids are adults, and she's writing historical and paranormal romance for grownups. She lives in Georgia with an ever-shifting population of relatives, friends, and feline strays.
Submitted by Sheila Connolly