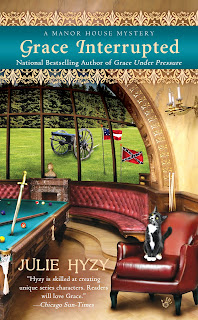 
Remember when I was last here? I mentioned that we were planning to host a group of Civil War reenactors on the grounds of Marshfield Manor? I can't say I was exactly looking forward to their arrival, but I certainly wasn't dreading it. They had contracted to camp out on our southernmost grounds. Except for our maintenance crews cleaning up when they were done, I didn't expect to have much contact with the group.

All that changed when one of the reenactors got into a fist fight with Jack's younger brother Davey. But that wasn't the worst of it. Zachary, the reenactor, had tackled Davey, but only because he *thought* it was Jack. I guess it had been years since they'd seen one another.

And then, you guessed it... things got worse.

Zachary was killed. Stabbed to death. That very night after the fight. And every clue points to Jack and Davey's guilt.

Deep in my soul, I know that Jack didn't kill Zachary. And I really don't think Davey did, either. Granted, I don't know him all that well, but ... I just have a gut feeling.

Gut feelings are never wrong, right?
Please tell me I'm right for sticking up for them.

Okay, gotta run. Frances just came back and I need to talk with her.

Do you trust your gut all the time? Even when evidence is stacked against it? Should I hold tight and keep protecting Jack?

Thanks! Hope to get back here to comment soon, but there are dozens of reporters trying to get at the murder scene. I may not get back here for a while!