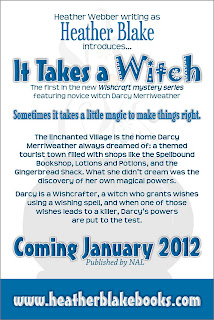 By: Darcy Merriweather
From: Heather Blake's It Takes a Witch (coming January 2012)

What do you do when life gives you a giant do-over?

You grab onto it, is what. Both hands. Tight. Death grip tight.

At least that what my sister Harper and I did. One day we were living in Ohio, with me divorced and unemployed, and Harper trying to stay out of jail (long story), and the next we find out we’re witches and on our way to our new home in the Enchanted Village in Salem, Massachusetts.

No looking back. No regrets.

At least on my part.

Harper still isn’t sure about the whole witch thing (it’s a big adjustment), but at least she can put her (somewhat) criminal past behind her and start over with a clean slate.

Except...she can’t, quite yet. Not with a pickpocket on the loose in the village. Keeping Harper’s arrest for misdemeanor larceny a secret from the villagers is a top priority for me. I don’t want people blaming her for these current crimes just because she has a criminal record. And I really don’t want people judging her badly—especially since they don’t know the story behind the theft... The story that explains why we have a Schnoodle named Miss Demeanor.

Maybe it would be good for all if people knew the whole truth about Harper, but I don’t think it’s (too) wrong to lie by omission to protect someone you love...to give them that chance to start over, fresh and new with a shiny clean slate. Do you?