Who is Viktor Luca? 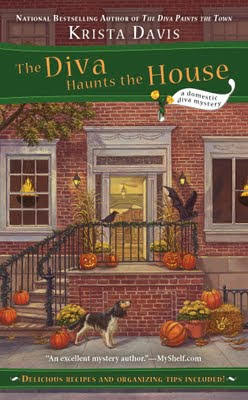 In the last episode of Who is Viktor Luca, Humphrey interviewed Wong~

Let’s see, your first appearance will be in THE DIVA HAUNTS THE HOUSE?   They told me to ask you about Viktor Luca.

Shhhh!  My granny knew him and to this day she won’t speak his name out loud.  She worked at the Widow Nagel’s boardinghouse where he lived.  He used to appear behind her sometimes when she was in the kitchen baking her famous sweet potato pie.  She claimed he could materialize out of thin air.  And get this, he refused to eat off the Widow Nagel’s good silver.  Would not touch it.  Insisted on stainless steel flatware.

Please!  Don’t say it.  Maybe we’d better have Sophie’s former mother-in-law, June Winston, tell you the rest of the story.

Tell us a little bit about yourself.

I guess readers know me best as Mars's mom.  His real name is Marshall, you know.  If I'd realized that he would end up being called the name of a planet and a candy bar, I would have named him something else.  I thought Marshall was such a dignified name.

I have another son named Andrew.  My dear husband is no longer with us.  He was a judge, you know.  A lovely gentle man, and very smart.  I think that's where Mars got his brains.


I understand that you're dating again.
Humphrey!  You're making me blush.  Can't you ask me normal questions like what's in my refrigerator?


Are you a domestic diva?
My sister took that title.  She was a marvelous hostess like Sophie.  Everyone loved her parties.

They tell me you knew Viktor Luca.  Is that true?
Oh my, yes.  Viktor was so handsome.  He had riveting blue eyes that looked deep inside you.  His skin was milky, as though he had never seen the sun.  It was the sixties, when people were all agog about the Beatles and hippies.  Viktor's dark hair waved down to his shoulders.  All the women were totally enamored of him.

But someone didn't trust him?
That's right.  My husband took great pride in being a good judge of character, and he was always suspicious of Viktor.  Viktor lived at the Widow Nagle's boarding house, but he had lots of money and no job that anyone knew about.  A number of the ladies invited him to travel with them as a companion.  He claimed to be from Paris and spoke of it quite intimately, but we didn't think his accent was French.  There were so many conflicting details about Viktor.  But he was the darling of all the hostesses in town.  A gathering wasn't a party unless Viktor was there being engaging and oh so charming.

I'm told there was an incident.
It was just terrible.  My sister threw a party at her house.  The same house where Sophie lives now.  The party was such fun that it ran late.  Viktor kindly offered to escort Peggy Zane home.  My husband and I were staying overnight with my sister.  Well, don't you know that we were awakened in the morning by Peggy Zane's husband asking where she was.  She never came home the night before!

Naturally we went straight over to the Widow Nagel's boarding house.  She took us to Viktor's room and -- it was empty.  The bed was stripped.  His belongings were gone. There wasn't one thing left behind.  It was as if he was never there.

I'm sorry, June.  They're giving me the time's up signal.

But don't you want to know what happened to Peggy?


Um, Krista?  Can we bring June back next month to tell us the rest of the story?
Tune in on August 20th, for the conclusion of -- Who Is Viktor Luca?
Submitted by Krista