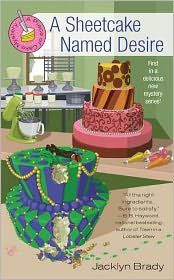 By Rita Lucero from A SHEETCAKE NAMED DESIRE, the first in the Piece of Cake Mystery Series by Jacklyn Brady

I’m excited to be here at Killer Characters among such great company.

My name is Rita Lucero, and I’m a trained pastry chef and cake artist. When my almost-ex-husband died last year, I moved to New Orleans and took over running the specialty cake shop he opened when we separated. It wasn’t my idea to take his place, you understand. His mother insisted, and I agreed for several reasons, not the least of which is that she needs me around. But in all honesty, running Zydeco Cakes is my dream job and that doesn’t exactly hurt. So far, I’ve loved every minute of it.

That doesn’t mean that adjusting to life in the south is a piece of cake, though. I grew up in Albuquerque, raised by an uncle and aunt after my parents died. I’m used to desert air and wide-open spaces, so the climate, the culture, the accents, and the never-ending party atmosphere in New Orleans are both exciting and a little overwhelming at times.

And then there’s my mother-in-law, the indomitable Miss Frankie Renier who is also my business partner at Zydeco. Even though Philippe and I were within hours of finalizing our divorce when he died, Miss Frankie clings to the belief that we would have reconciled if he hadn’t gotten himself killed. I love her. I truly do. But let’s face facts: losing her only son has left her a little unhinged.

And she’s not the only one who makes my new life interesting. Not by a long shot!
Between the staff at Zydeco, the crew at the Dizzy Duke, our local watering hole, and the seriously hunky homicide detective who investigated Philippe’s murder, life in New Orleans is never dull. If you get a chance, stop on by and see exactly what I mean.

Visit Jacklyn Brady at her website
Submitted by Janet Bolin