by Charlotte Bessette
from LOST AND FONDUE

What was I to do? School started today. The noise coming from the twins upstairs was about to drive me wild. Rags, my cuddly Ragdoll cat, was hiding beneath the kitchen table.

I crouched and stroked his ears. "It's all right. They're not committing any crimes." At least I hoped they weren't. Why wasn't their father dealing with the screeches, I wondered, until I remembered that he had left early to drive to Cleveland for a wine seminar.

As I rose and tended to the twins' breakfast, Amy raced into the kitchen, her brown hair flying off her frowning face.

"Aunt Charlotte." She plucked at the checkered blouse she had donned. "I hate it. It's too tight."

It wasn't. It looked adorable.

"Because you claimed it was perfect." Last week we had gone on a shopping spree to find three new outfits for school. The checkered shirt with the A-line turquoise skirt had been Amy's favorite.

Clair waltzed into the kitchen while slipping on a purple headband that matched her ruffled sweater and skirt combo. "Don't mind her. She's just trying to dress for success."

"Are, too. She just found out that Tommy hates the color turquoise."

I eyed them both. "And exactly how did you find that out this early in the morning?"

"The computer was on in Daddy's room," Clair said.

"So I did a bit of detecting, like you," Amy added.

I blanched. I was a cheese monger not a detective. And yet here were my nieces--who weren't really my nieces, but that's another story--referring to me as a snoop.

"And Tommy was online and he said his favorite color is green," Amy went on. "Can you imagine? Green? I look horrible in green."

"You look lovely in turquoise. I'll be he changes his mind when he sees you."

"No, she's just making it up," Clair said in a snarky but cute tone.

"Sit down and eat," I said. I had prepared a hearty meal of pineapple and ham quiche, fruit salad, and milk. The girls needed good nutrition if they were going to focus on schoolwork. The first day of the year was always the most distracting. So many friends to see, so many teachers to get used to.

And now boys? They were too young. They were barely nine years old. Boys?

They gobbled their food and hurried with their backpacks to the foyer. My pal Meredith was chauffeuring them to school. She had been their teacher last year. Now she was the love of my cousin's life.

"Bye, Aunt Charlotte," the girls screamed as they tore out the front door.

"Be brilliant," I yelled back from the front porch.

As the car pulled away from the curb, I assessed my own attire. Was I dressed for success? Beige trousers, beige blouse, blonde hair. I looked a little, um, neutral. It was time for a switch. I pictured more red in my future. Something hot, flirty, and packed with energy. Even a detective...I mean cheese monger...needs to feel inspired and energized to face the day, right?

What do you wear when you dress for success? What do your kids wear?

PS. If you want the recipe for the quiche, here's a QUICHE RECIPE LINK. 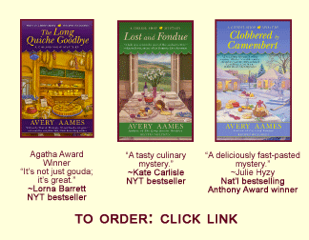