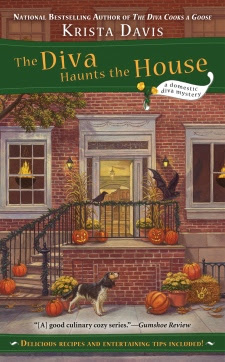 The last time I visited, I wanted to see the ghost in my Aunt Sophie's house.  But I saw something even better!  A vampire!

Can you believe it?  Everything worked out perfectly.  My best friend, Vegas, is staying at Aunt Sophie's house with me.  We're helping her with the haunted house, which is awesome!

My Gramma June, who isn't really related to me but who is pretty cool, told us that story about Viktor Luca.  So we called the haunted house Bubble & Trouble, A Coffin & Cauldron for Otherworldly Travelers.  There's even a vampire's bedroom and everything.

We never thought Viktor would really show up and bite someone on the neck, though.  But we spotted him running away!  Natasha set up a spooky haunted scene outside her house with a fog machine.  There was no mistaking that cape when he took off running.  And Vegas and I saw the bite on the dead man's neck!  The minute we came home we wrapped our necks with wooly socks to make it harder for him to bite us.

We texted everybody we knew to warn them.  Poor Vegas!   She's staying with my Uncle Mars and Natasha while her dad is away in the military, and they took her cell phone away to punish her!  I don't mind lending her mine, though.

Oops, sorry for the interruption.  Vegas and I are going to sleep on the pull-out sofa in the family room.  We're snuggled under down comforters and, Mochie, my aunt's Ocicat, is purring between us.  Aunt Sophie just brought us mugs of my favorite nutmeg and cinnamon tea and a plate of bat-shaped cookies.  She's so cute.  She's afraid that watching an old Vincent Price movie on TV will scare us.  Isn't that silly?  What could scare us more than seeing a real dead guy with a bite on his neck?

Oops. Another interruption.  Sorry.  As soon as I'm done with this blog, Vegas wants to text Blake because she's in loooove.  Okay, I admit that I have a crush on Jesse, but Vegas is wild about Blake!

So anyway, I could use some advice.  Aunt Sophie says there's no such thing as vampires.  Part of me wants to believe her.  But then, Gramma June thinks Viktor Luca was a vampire, and she talks to the ghost of her sister.  Vegas says Aunt Sophie is just giving us a line so we won't be afraid.