Skye fights her way back to the blog! 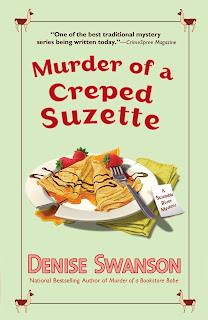 Phew! I know it’s been a long time since I blogged here, but it’s been tough fighting off all my relatives and friends who wanted to drop by and put in their two cents. But I’m here now and a lot has happened in the months that I’ve been gone. Just to remind you, here in Scumble River, it is October 2005.

As always, my job as a school psychologist has been hectic, and as we head into November, all the holiday issues will begin to surface. While kids that come from happy families may Thanksgiving and Christmas, those with less ideal situations often feel torn between feuding parents. And for those who have lost a loved one, it’s even worse. My counseling chairs get a real workout right after those school breaks.

Recently, however, I’ve been dealing with Rex Taylor, a music promoter who was determined to turn Scumble River into the Branson of the Midwest. I thought Missouri was in the Midwest, but apparently not the part of the state that Branson is located. Anyway, he blew into town, put on a free concert featuring Flint James, a hot new country music star, and Suzette Neal, an up-and-coming one, then tried to sweet-talk everyone into turning our community into a tourist trap. Needless to say, sides were taken, battles were fought, and a murder occurred.

Most recently, I had to intervene when some of my fellow Scumble Riverites wanted to shut down Tales and Treats, the new bookstore. Really, who in their right mind wouldn’t love having a bookstore in their town? Ah, but that’s the rub. Several of the people involved weren’t in their right mind.

As it happens, Suzette’s mother died when the family lived in Scumble River many years ago, and she asked me to help her find out what really happened to her mom. Since I’m the police psych consultant, and my boss, Chief Wally Boyd (he’s also my fiancé, but that’s here nor there) gave me the go ahead, I agreed to look into it.

Sadly, the situation quickly turned into a case of not one suspicious death, but two, and I had my hands full trying to figure out if the deaths were connected. Adding to my stress was a cute little dog that I somehow ended up fostering, and boy, was my cat Bingo ticked about that. Now I know where the term hissy fit came from.

On the personal front, Wally and I had to deal with a major threat to the annulment he’s been seeking to dissolve his previous marriage. He’s been really understanding about my wish to be married in the Catholic Church, but this situation nearly pushed him past his limits.

And then there was Uncle Dante, the Scumble River mayor… But that’s a story for another time, or you can read all about that in Murder of a Creped Suzette coming out October 4, 2011.