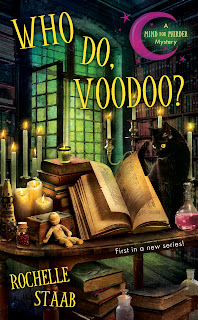 Chatting with Viv
By Vivian Gordon from Rochelle Staab’s Who Do, Voodoo?

Hello everyone, I’m Vivian Gordon. You might recognize me from old “Beach Blanket” movies (I was one of the beach bunny extras) or “Hollywood Hop” the music variety show that ran here in Los Angeles back in the sixties (I was one of the go-go dancers.) Because I’m the only member of the Gordon family with an entertainment background, I was elected to talk to you today.

“You elected yourself, Mom.”

Well. Whatever. That was my daughter, Liz, a well-dressed, brilliant psychologist who recently divorced my famous son-in-law Jarret Cooper, a pitcher for the Los Angeles Dodgers. Sorry, I meant ex-son-in-law. Anyway, the whole voodoo mess started when Liz and her dear friend Robin Bloom found a tarot card on Robin’s front door. Horrible prank.

The harasser left a tarot card similar to one I drew two years ago in a birthday tarot reading for Robin’s husband Josh. My heart sank that night when I drew the Three of Swords: Heartache. Robin’s dear sweet Josh died the next day in a car accident. I can’t bear to think about it.

“The cards you drew were random, Mom. Josh’s death was an accident.”

My pragmatic daughter won’t pay attention to omens. Liz was much more open to the supernatural when she was a child. Now she’s a fancy psychologist (did I mention she was brilliant?) and she acts like she doesn’t believe. Takes after her father. But as I was saying, when I heard about the card on Robin’s door, I immediately pitched in to help Liz and Robin find the horrid culprit. It was my idea to phone my son Dave, a LAPD detective just like his retired father. And I made the girls call Nick Garfield, Dave’s friend who seems to know everything about the occult. Possibly more than I do.

I know. Unfortunately, I didn’t realize Liz and Nick would end up spending so much time together. And Nick is a bachelor—you know how they are. Okay, he’s a renowned professor too. But Liz is used to a more glamorous life. I realize Jarret cheated on her—unforgivable—but people can change. I simply want my daughter to be happy.

“Get over it, Mom. Jarret and I are divorced. Try to get back on point.”

Right. Well as it turns out, Robin became involved in an even bigger mess than just a tarot card on her door. Good thing Liz, Nick, and I were there to help her.

Well, I DID help. I drew a Tarot card perfectly describing a killer. I only wish Liz had invited me to the séance or the voodoo ceremonies. I could have used some tips for the Halloween bash I’m throwing this weekend. Costumed, of course, though I can’t decide if I should dress as Marilyn Monroe or Gypsy Rose Lee. What about you? What was your favorite Halloween costume?

Rochelle has kindly offered to give away a copy
of WHO DO VOODOO?
to a commenter (sorry...US residents only).
The opportunity will last for 72 hours
so make sure you leave a comment,
and the winner will be announced
before midnight, EDT, on Halloween!
How perfect is that?? Cue scary music.