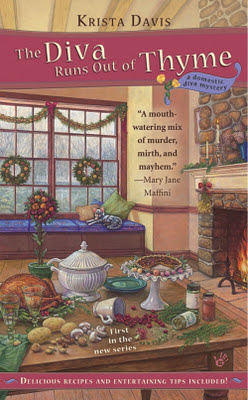 for Krista Davis
author of the Domestic Diva Mysteries


What would you do if you thought a friend or family member had murdered someone?  Seriously.

It happened to me a few years ago over Thanksgiving weekend.  I had planned a nice quiet family Thanksgiving.  My parents came, and my sister brought her new fiancé.  I guess my big mistake was entering the Stupendous Stuffing Shakedown because someone went and killed the judge.

If that wasn't bad enough, the cop, Wolf Fleischman, suspected me.  That was a bit of a nightmare because Wolf was kind of cute.  Freshly divorced from Mars, I was ready to meet a guy like Wolf, except under better circumstances.

My mother had ideas of her own where my love life was concerned and colluded with Mars's mother to get us back together again. Before I knew it, my quiet little Thanksgiving dinner had exploded into chaos and over a dozen people sat down to eat at my dining room table.

I could deal with that -- right up until I realized that one of them was a murderer.

The funny thing about a killer in the family 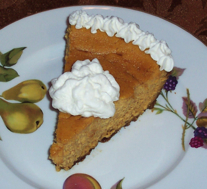 or among close friends is how differently one reacts.  There's the whole emotional and psychological thing for starters.  Would you really want to turn a dear friend or a sibling in to the police?  Would you even want the police to know you suspected that person?  What if you weren't sure?  There's the need for justice, not to mention the urgency of stopping the person from hurting or killing anyone else but if you're not 100% convinced, what would you do?  Talk about conflicting emotions.

Wolf was upset because I took matters into my own hands.  Well . . . it's different when you know the person.  It's not as scary.  I never thought anyone I knew would harm me. Pretty naive of me, huh?

This Thanksgiving, I'll be surrounded by 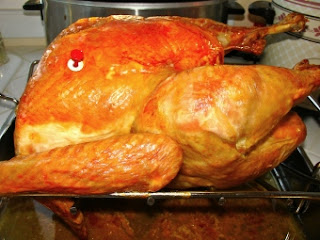 family and friends again, noshing on turkey, bacon and herb stuffing, creamy mashed potatoes, and a new dessert that I'll be trying for the first time -- cream cheese pumpkin pie.  And not a murderer in sight, I hope.

So how about you?  What would you do if you suspected someone close to you had murdered?  And what are you looking forward to most at your Thanksgiving dinner?