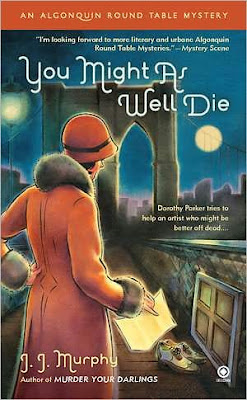 You Might As Well Die by J.J. Murphy
When second-rate illustrator Ernie MacGuffin's artistic works triple in value following his apparent suicide off the Brooklyn Bridge, Dorothy Parker smells something fishy. Enlisting the help of magician and skeptic Harry Houdini, she goes to a séance held by MacGuffin's mistress, where Ernie's ghostly voice seems hauntingly real...
Mystery Lovers Bookshop (free shipping on orders over $10!)
BN.com 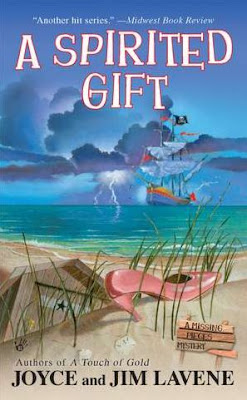 A Spirited Gift by Jim and Joyce Lavene
As the mayor of Duck, North Carolina, Dae is playing host to twenty North Carolina elected officials attending her first Mayors' Conference Weekend at the Blue Whale Inn. When the body of Mayor Sandi Foxx is discovered the morning after a severe storm, Dae receives a vision through the mayor's ring; that there's a killer among the guests who's as deadly as any hurricane.
Mystery Lovers Bookshop (free shipping on orders over $10!)
BN.com 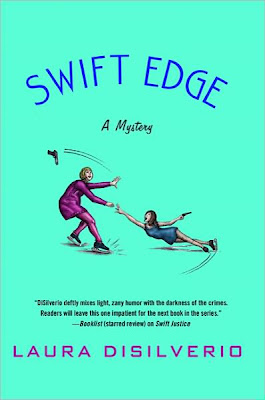 Swift Edge by Laura Disilverio (aka Lila Dare)
When world-class figure skater Dmitri Fane goes missing, his partner knows just whom to hire. It’s up to Swift Investigations to find the missing Fane, and fast—-the Olympics are just weeks away. It should be no trouble for the investigative team of Charlie Swift and Gigi Goldman: Their chief obstacle is Gigi’s teenage daughter, Kendall, and her mad crush on Fane. That is, until the skating team’s coach is brutally attacked and a colleague of Dmitri is killed, and things start to get complicated.
Gigi’s corralling a lovesick Kendall and dying to test out the hilarious techniques from her surveillance class. Charlie’s dodging bullets and fending off Detective Connor Montgomery’s advances. Their client is suddenly MIA. Can Charlie and Gigi solve two missing-persons cases and a murder at once, or will the culprit get off skate-free?
Fast-paced adventure, high-stakes intrigue, and the madcap capers of these unlikely partners-in-crime solving make Swift Edge a delightful and welcome addition to the series.
Buy at:
Mystery Lovers Bookshop (free shipping on orders over $10)
BN.com 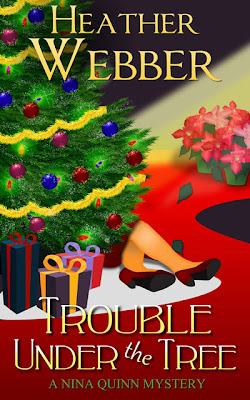 Trouble Under the Tree by Heather Webber
When landscape designer Nina Quinn agrees to deck the halls of Christmastowne, an indoor Christmas village, little did she know how dirty the job would be.
Christmastowne has been plagued by mishaps. Someone’s stealing toy donations, cutting lines to the security system, starting fires, and poisoning the poinsettias. Worst of all, Nina’s neighbor, Fairlee McCorkle (aka Mrs. Claus) is found murdered under Christmastowne’s enormous decorated tree.
The deeper Nina digs for clues to unwrap a killer, the more she discovers that some secrets are best left buried in the past.
(The 6th book in the Nina Quinn mystery series. E-book only.)
Smashwords
BN.com
Amazon 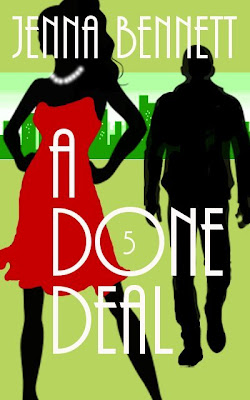 A Done Deal by Jenna Bennett
Silver bells, silver bells...
It's Christmas time in Nashville, and all Savannah wants to unwrap on Christmas morning is Rafe. Unfortunately, things don't look so good. He's back in town, but not alone: on his arm is a stunning brunette, just the kind of woman Savannah always suspected was his type.
When Alexandra Puckett asks her help in figuring out a way to stop Maybelle Driscoll from marrying Alex's father Steven, Savannah jumps on the chance. It'll give her something to think about other than Rafe and the mysterious Carmen, and anyway, she doesn't like Maybelle much herself.
Between investigating Maybelle's past, helping her clients Aislynn and Kylie buy a house, and stalking Carmen and Rafe, she soon has her hands full. And that's before someone starts gunning for her. Suddenly it's not a question of unwrapping anything on Christmas morning anymore; it's a question of whether she'll even survive to see another Christmas.
Coming December 15th!
Submitted by Heather Blake Webber