The New Girl in Town 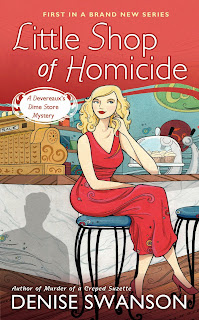 Hi! My name is Devereaux Sinclair and I live in Shadow Bend, Missouri. It’s a small town about an hour away from Kansas City where I used to work in the investment business. But then my grandmother, Birdie Sinclair, starting having some memory problems and her doctors told me I needed to be around more. And since Gran had dropped everything to take care of me when my parents deserted me, I felt that I had no choice but to return the favor.

So I quit my job at Stramp Investments and bought the old dime store in town. I have to admit that I don’t miss the commute or the stress, but going from a six-figure salary to a barely- making-it income is a bit of an adjustment. I used all my savings and sold off nearly everything I owned (okay, not my sapphire black BMW Z4) to buy, renovate, and stock Devereaux’s Dime Store and Gift Baskets.

Unfortunately, as I was getting my new business off the ground, my old boss was arrested. Turns out, his entire investment company was a huge Ponzi scheme. Everyone thought I had been in on the fraud, which I wasn’t. But I can understand their suspicions. How in the world had I not known that Mr. Stramp was cheating our clients?

Still, one good thing did come out of all this. A hot U.S. Marshal on medical leave from the service has volunteered to help me investigate. And whoadoggie do we have chemistry. I haven’t felt this way about a guy since I was sixteen. Of course, that does make it a tad difficult to concentrate on the fact that if we don’t find out the real killer’s identity, I’m going to end up in the prison cell next to my father.