Waiting for Hayley in January by Lucy Burdette 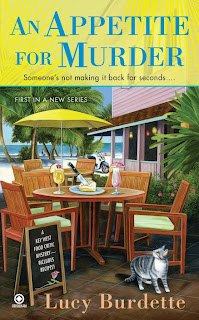 By Hayley Snow from the Key West food critic mysteries

Hi everyone! I can see that my writer wasn't going to get around to putting up a post, so I thought I'd better take things into my own hands. She just turned in the manuscript for my second Key West adventure, DEATH IN FOUR COURSES, and she says she's wiped out. How hard could it be to write down what I tell her? Besides, I've seen plenty of other writers around here who juggle two and three mystery series at a time! Although truth be told, I prefer being an only character...

Anyway, my big launch date is January 3 too, Pepper! I can't wait to show you around my new town. Lots of people who come to the island on vacation think the highlight is going to bars on Duval Street. All I can say about that is a little goes a long way. Though a lot of great bands do come through town--who doesn't want to play Paradise in the dead of winter? The art scene in Key West is amazing, too--my roommate Connie's boyfriend Ray is one of the artists in residence at The Studios of Key West, so definitely check that out. And of course the food...fried grouper, and conch chowder, and Key West pink shrimp. Just be a little careful with the key lime pie...this is a murder mystery after all.

And the weather is simply heaven. My mother calls a couple of times a week to complain about New Jersey in November and December. I don't want to say too much about how great it feels down here to be wearing sandals and a sweater when she's moved into boots and a down jacket--she might get the idea of joining me! LOL! And there are all kinds of people in Key West--from filthy rich to homeless, which makes it so interesting. But be a little careful here too about making assumptions about which are the good guys and which are the bad.

I'm so looking forward to seeing you all next month! You can follow my writer Lucy on Twitter (she tries not to talk only about me!) or facebook or on our website. She's posted a sample of the new book there, and all kinds of recipes too, including our favorite Christmas cookies!
Submitted by Lucy Burdette aka Roberta Isleib