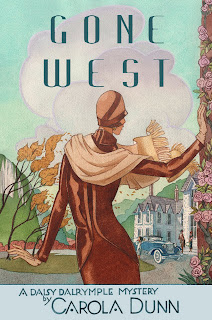 I ask you, what is one to do when an old schoolfriend asks for help? Sybil was widowed in the Great War. She hadn't a husband to turn to. She was supporting herself and her young daughter as secretary to a writer. I admire her for that.

I, Daisy Dalrymple as was, managed for myself for some years after the war. You see, I lost my brother and my fiancé at the front, and my father died in the influenza pandemic in '18. I could have lived with my mother (Heaven forfend!), or sponged off the distant cousin who inherited my father's estate and title. Instead, after trying various jobs, I found my métier as a journalist.

And then I married my darling Alec, so now, strictly speaking, I'm Mrs Alec Fletcher. But the dear old lady who chronicles my adventures, Carola Dunn, once having called the series of books by my maiden name, thought it best not to change.

To get back to Sybil: We weren't particularly close at school, actually, and I lost touch with her after sending condolences on her husband's death. We all had our own losses to mourn. So I was surprised to hear from her one day in late summer, 1926. Something strange and disturbing was going on, she said, at the Derbyshire farmhouse where her author-employer lived. She was worried. She had heard through the Old Girls' bush telegraph that I rather specialised in mysteries.

That was nonsense of course. Specialised, indeed! I can't help it if I stumble across more than my fair share of murders.

However, I had absolutely no reason to foresee that Sybil's problem was going to result in events of interest to the police. If I had guessed, I would have refused her invitation. Alec gets rather sticky about such things. You see, he happens to be a Detective Inspector at Scotland Yard, and it embarrasses him when his wife meddles in police investigations.

Not that I meddle. I am occasionally able to be of assistance... But that's beside the point. Sybil's invitation seemed perfectly innocent and I was sure I'd be able to put her mind at rest. Besides, I was looking forward to my first long drive in my new car, a sky-blue 1925 Gwynne Eight.

How was I to guess that the isolated farmhouse in the Derbyshire Dales harboured a seething mass of resentment, jealousy, and long-lived grudges that would soon lead to unnatural death?

A sullen farmer, a worried doctor, a bitter old woman, a flighty girl with expensive tastes, a young man with literary aspirations, an irresponsible but charming Irish playwright, an overbearing man of the world: Add a secret that could change everyone's lives--an explosive mixture, to be sure. But why did it have to wait until my visit to explode?

Wouldn't you know it: As soon as the local police found out about Alec's profession, they called in the Yard. Alec's Superintendent sent him rushing north to make sure I wasn't interfering. I might as well admit that Superintendent Crane doesn't like me.

Naturally, Alec found out he needed my assistance. I knew all the people involved and he didn't. It would save him a lot of time and effort if he'd just acknowledge that when I say someone just isn't the sort of person to have committed murder, it's true.

Was I right this time? You can read about my trials and tribulations in GONE WEST, Carola Dunn's latest addition to my story. 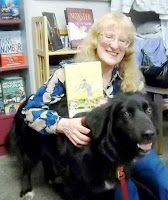 Do visit me and Carola on Facebook and on our website. Also, you can watch a video of Carola talking about me (and a few other things) here.

I may live in the 1920s, but that doesn't mean I can't keep up with the times!
Submitted by Janet Bolin