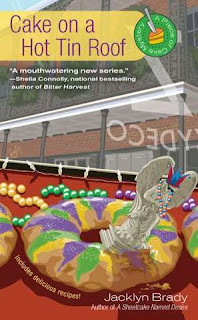 by Miss Frankie Renier from Cake on a Hot Tin Roof, (out on Feb 7!), second in the Piece of Cake mystery series by Jacklyn Brady.

It’s Mardi Gras and the good times, they are a-rolling! I just wish I could get my daughter-in-law to roll with them.

Don’t get me wrong. I’m not complaining. Rita’s just as sweet as she can be, bless her heart, and I’m lucky to have her here with me. Why, if not for her I’d be completely alone since my son died and his bakery, Zydeco Cakes, would be running amok. I’m grateful she’s here to take over for me. But she does have a tendency to worry and everybody knows there’s no room for worry during Mardi Gras.

Take, for instance, the Captain’s Court party for the Krewe of Musterion. My son, Philippe, got the baby in the King Cake last year and tradition dictates that it was his job to host this year’s party. Of course, that’s impossible since he’s no longer with us, so it made perfect sense that Rita, being his widow and all, should step in and act as hostess in his place. And that’s exactly what I told the folks at Musterion. That way the party could go on without so much as a hiccup.

They, of course, were thrilled. But Rita...

It’s not her fault, I suppose. She’s not from around here, and she really doesn’t understand how things work, though Lord knows she tries. She wasn’t nearly as excited about my idea as I thought she’d be. But what did she expect from me? I couldn’t just sit back and do nothing, could I? The Captain’s Court is tradition—one that’s been around since God was a boy. The party needed a hostess. And it’s not as if I didn’t do my fair share of the work.

It all would have been just fine if not for that blow-hard Big Daddy Boudreaux. The way he got himself killed was almost enough to prove Rita right and me wrong. But I don’t want to talk about that now.

It’s Mardi Gras. King Cake anyone? Maybe you’ll get the baby this year!

Jacklyn Brady lives on the Gulf Coast and writes the Piece of Cake mystery series set in New Orleans and featuring cake artist and trained pastry chef, Rita Lucero and, of course, Miss Frankie. The first book in the series, A SHEETCAKE NAMED DESIRE was released in August 2011. Look for book #3 (tentatively titled ARSENIC AND OLD CAKE) in the fall of 2012. You can visit Jacklyn at http://www.jacklynbrady.com or find her on Facebook and Twitter.