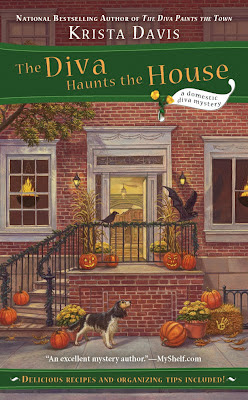 for the Domestic Diva Mysteries

"Has anyone talked to Krista lately?" asked Natasha.

"I have."  Humphrey scowled.  "I must say that I do not like where the current manuscript is going."

I looked around at my friends.  I had to tell them.  As gently as I could, I murmured, "I hear there's a short story."

"A short story? Why don't I know anything about that?" demanded Natasha.  She gasped and slapped a hand against her collar bone.  "Does that mean she left me out of it?"

Mars took a deep breath.  "None of us are in it.  It's about some woman named Dana."

A hush fell over everyone who had crowded into my living room.  No one, except Nina, touched the crabmeat dip, the pesto crostinis, or the baked brie I had prepared.  Not even the teens, Jen and Vegas.

Dash Bennett finally broke the silence. "I hope it's not curtains for you guys.  Maggie, Ray, and I aren't regulars, so I figured we'd probably be let go.  It's a tough market for mystery characters.  I've been thinking of trying my hand at romance."

I glared at Mars.  No one was supposed to know what had happened between us!  Wolf raised an eyebrow at me.

Humphrey chimed in. "Excuse me.  I'm the one who had a crush on Sophie before you ever met her.  I'm the love interest."

Natasha smacked Mars. "I hope you mean you're the love interest because I'm really the star of the books."

The door knocker sounded.  Krista arrived with Bernie, both carrying bottles of champagne.  She asked me to bring some glasses.

When we were all gathered, Krista said, "I'm thrilled to tell you that you were nominated for an Agatha Award!"  She handed out the list of nominees.

"Not just you."  Krista waved her arm.  "All of you who were in The Diva Haunts the House!"  Krista raised her glass.  "I love you all."

I wondered if she really loved Natasha, but there was so much good cheer and celebrating that I didn't really care.  Mochie sprang around the room in a wild cat dance, Daisy howled, and hugs and kisses were shared by all.

And then Natasha had to go and ruin it.  Honestly, some people just don't know when to shut up. "What's this I hear about a short story?" she asked, glowering at Krista.

"That was nominated for an 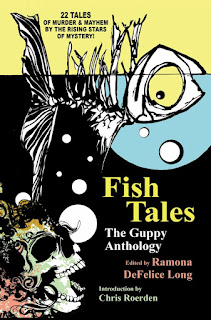 The corner of Natasha's mouth twitched.  "There was a Dana in The Diva Haunts the House. Oh!  There you are." She lowered her voice. "She's not taking over here, is she?"

"Goodness, no. You characters worry about the silliest things! It's a different Dana in the short story," explained Krista.

Natasha puffed out her chest.  "Well, you're very welcome, Krista. I'm sure you recognize that I'm the reason for the nomination."

I sputtered. "If anyone is responsible, it's June.  She's the one who came up with the story about Viktor Luca."

June blushed and shrugged coyly.  Krista wrapped an arm around her, and they drifted over to chat with Officer Wong and Leon.

I ignored her slight and smiled. We got a nomination! Woohoo! Time to celebrate and thank everyone who nominated us!

I lifted my glass. Cheers! And many, many thanks!
Submitted by Krista