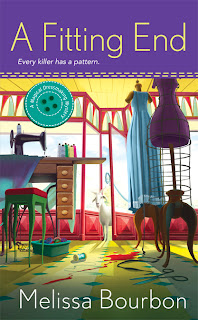 By: Harlow Jane Cassidy
From: A Magical Dressmaking Mystery Series
Author: Melissa Bourbon
Book 2 Title: A Fitting End
Pub. Date: February 2012
Secrets in Bliss are as abundant as the bluebells that are about to sprout.   The golf pro is dead, stabbed with my sewing shears, no less, and I'm running behind with the elaborate gowns I'm making for the Margaret Moffette Lea Pageant and Ball.


The very same Margaret Moffette Lea Pageant and Ball that I was never part of, me being a HAVE NOT in Bliss, Texas, rather than a HAVE.


But I’d much rather make the gowns anyway.


On the bright side, I did get to see Trudy and Fern Lafayette’s atelier today, and do you know I’ve never seen a sewing studio like that before.  When Trudy asked me,  my pulse actually skittered and I practically flew off the sofa.  Seeing another seamstress’s workshop is like crack to a addict.  And the Lafayette sisters?  From what I know of them, they don’t let anyone into their studio who isn’t having a Victorian dress made.


We walked through the sliding glass door and into a dressmaker’s wonderland.  Victorian gowns, thier hoops making the skirts as wide around as Christmas trees, hung on headless mannequins.  Resplendent.  It was the only word that came to mind as I stared at the array of nearly finished dresses. Fourteen of them.
It felt like a dream room decked out in silks, satins, and velvets.  Trains and ruffling, lace and ribbon, beads and sequins.  Each gown was a work of art.


“Hand-done, each and every one,” Fern told me.  She pointed to an ivory dress with tulle artfully draped along the bodice line.  “You won’t see this attention to detail anywhere else in the country.  Each bead is done one by one."
I'd asked her about corsets and petticoats, but I knew the answer to every question.  Yes, corsets, petticoats for the traditionalists, but crinoline for those who weren’t sticklers.  The dresses could weigh up to eighty pounds if it was heavy on the beading and had layers of petticoats.  Wearing one would be like lugging around barbells and one more reason I’m glad I’m well past the age of being a Margaret.


At least I think I’m glad.