New Kid On the Block 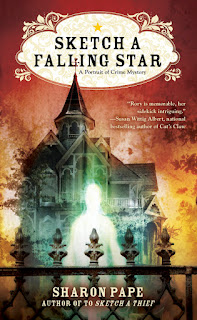 by Eloise Bowman from SKETCH A FALLING STAR, the third book in the Portrait of Crime series by Sharon Pape.

Yoo hoo, Eloise here. Not sure why I'm here, yet here I am. Odd things like this have been happening to me lately. I suppose that's part and parcel of being ninety-four and a quarter. I was doing fine living by myself until I had a stroke. Then my son insisted I move in with him and his family. I didn't have any choice in the matter. There's a lot of that going on in what used to be my life. Now don't get me wrong; I love my son and grandchildren. I've even grown rather fond of my daughter-in-law over the years. But I feel like a prisoner in their house. So I escape whenever I can. It makes them think I've gone completely daft, but it's the only real fun I have nowadays.

I'll let you in on a little secret. The stroke left me with a dandy gift they don't know about. Truth be told, they wouldn't believe it even if I did tell them. You see, from time to time I'm visited by souls who've passed on. I have to admit it's taken a bit of getting used to. They stop by whenever it suits them. Two o'clock in the morning or ten o'clock at night -- it's all the same to them. They generally want me to pass messages to the living as if I run some sort of mail service. They can get really pushy about it too. Now I don't mind helping out, but I'm not as spry as I used to be. Of course it does keep life interesting.

Speaking of interesting, I recently met a young neighbor woman by the name of Rory McCain and her housemate, Ezekiel Drummond, a deceased federal marshal from the Arizona Territories. Yes indeedy -- he's as dead as dead can be. But that didn't stop them from opening a private investigating business together. They're not exactly the most compatible of partners, but then coming from different centuries is one heck of a generation gap.

Their latest case was a real head scratcher, as my mother used to say. Rory's aunt Helene was vacationing in Arizona with members of her amateur acting troupe when they were caught in a flash flood. After the water receded, one of the actors was dead. The medical examiner ruled the death an accident, but Rory and Zeke were hired to find out if it was an act of human nature and not Mother Nature.

As if that wasn't enough, Rory finally figured out who shot and killed the marshal over a hundred years ago. I'm as pleased as punch to say I helped her solve that case. Poor Zeke wasn't any too pleased though, because I also helped her uncover the dark secret he'd been harboring all these years.

Now if you think things are going to settle down for those two, you're dead wrong. They're in for even more surprising twists and turns in the future, but I'm not going to let that wildcat out of the bag just yet. If you're ever in the neighborhood, stop by for a dish of ice cream with me.

Would you help satisfy this old lady's curiosity and tell me if you'd rather have psychic abilities or live with a ghost like Zeke? No, you can't choose both! 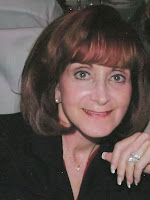