Oh, for a quiet life! 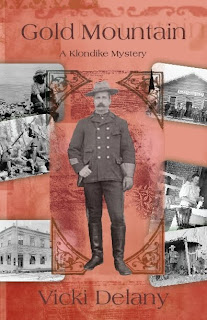 Fiona MacGillivray, owner of the Savoy Saloon and Dance Hall, the finest establishment in London, England, transported all the way to Dawson, and heroine of the Klondike Gold Rush series by Vicki Delany.

I wonder what it would be like to have a quiet life. Unlikely I will ever know. Everywhere I go trouble seems to follow - the murder of my parents, living with Gypsies, begging for pennies in the filthy streets of Seven Dials, then life as a proper lady with a cut-glass accent and nimble fingers. It was the latter that got me into some difficulty and I had to make haste and leave England for more hospitable shores. I spent four productive years in Toronto, before I was confronted by a butler in his night-wear while ransacking the bedroom of my erstwhile suitor Mr. Jonathan McNalley (more to the point, perhaps, the boudoir of his wife and that of his mother, the real power in the family).

I had no choice but to flee Toronto as fast as possible, after stopping to collect my eleven-year-old son, Angus, and a valise kept eternally prepared to enable a quick getaway. Angus and I leapt aboard the first train pulling out of the station. We arrived in Vancouver in July of 1897, to find everyone on the streets obsessed with talk of GOLD! Gold found in the Klondike! (Wherever that might be.)

Deciding it would be nice to make my living legally for a change, I decided to head north, Klondike Ho! Not that I had any intention of prospecting. Certainly not. Quite dirty, I’m told.

I thought of opening a theatre perhaps, in this place called Skagway in Alaska. I would employ dancers and actresses to provide respectable entertainment for men far from home.

I did not last long in Skagway. It seems the town is run by an unscrupulous gentleman by the name of William Randolph Smith, whom they call for some uncivilized reason, Soapy. Soapy decided he would control my theatre and we would extend the duties of our actresses to include private performances.

I bid Skagway a not very fond farewell, hired Indian packers at Angus’s suggestion, hitched up my skirts, relaxed the stays on my corset fractionally, and we set off over the Chilkoot Trail.

That was an experience I hope never to repeat.

It’s been a busy year here in Dawson, setting up the Savoy, becoming the most profitable dance hall in town, trying to keep an eye on Angus while I work around the clock, making the acquaintance of the handsome Corporal Richard Sterling of the North-West Mounted Police . Then there was that murder, where the scoundrel had the audacity to die on my center stage. And the dancer who got thoughtlessly got herself killed immediately following my dismissal of her, so everyone thought I had something to do with it.

Now, it would appear as though I’ve been followed to Dawson by Soapy’s henchman, Mr. Paul Sheridan, who declared his intention to marry me the day we met. Mr. Sheridan is whispering something about having a map that shows the way to a mountain of gold, a valley as warm as California. He wants me to come with him. He seems not to believe me when I said I have no intention of accompanying him.

I’m sure he’ll tire of waiting for me soon. Don’t you agree? 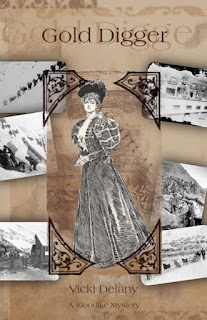 Vicki Delany has been uncommonly intrusive into my affairs, with the help of Angus I am sure (the boy has can’t decide if he wants to be a writer or a Mountie), and she has written about my adventures in Gold Digger and Gold Fever, both published by Dundurn Press. As soon as I settle this business with the odious Mr. Sheridan, I’m sure she will write about that as well. Probably call the book Gold Mountain or some such dramatic foolishness.

“It’s a crime not to read Delany,” so says the London Free Press. Vicki Delany is one of Canada’s most varied and prolific crime writers. Her popular Constable Molly Smith series (including In the Shadow of the Glacier and Among the Departed) have been optioned for TV by Brightlight Pictures. She writes standalone novels of modern gothic suspense such as Burden of Memory and More than Sorrow (Sept 2012, Poisoned Pen Press), as well as a light-hearted historical series, (Gold Digger, Gold Fever), set in the raucous heyday of the Klondike Gold Rush. She is also the author of a novel for reluctant readers, titled A Winter Kill (Rapid Reads).

Visit Vicki at www.vickidelany.com , www.facebook.com/vicki.delany, and twitter: @vickidelany. She blogs about the writing life at One Woman Crime Wave (http://klondikeandtrafalgar.blogspot.com)
Submitted by Erika Chase