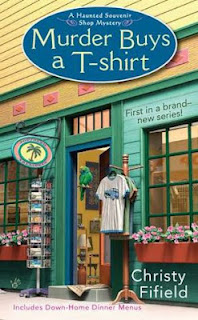 Growing up, I always thought I wanted a pet. A nice kitty, or a dog. Maybe even a hamster, or a turtle. It never crossed my mind to wish for a parrot. Especially one with an extensive vocabulary of words that can't be used in polite company.

But that's what I got when my Great Uncle Louis died. Not right away, since the parrot in question-his name's Bluebeard-lived in Uncle Louis's souvenir shop, Southern Treasures, here in Keyhole Bay, just north of Pensacola, Florida.

I was only ten when Uncle Louis left me the parrot, and a fifty-five percent interest in the shop. The other forty-five percent belongs to my cousin Peter, but he lives a couple hours away, has a Master's degree that makes him think he knows absolutely everything, and has never worked in retail.

Doesn't stop him from offering his (ridiculous) advice on how to run the shop.

Peter and his folks are all the family I have left, and I really feel the lack, living in a small Southern town that measures residency in generations instead of years.

That is, they were all I had left, until Uncle Louis showed up again. It seems Uncle Louis, another loner in this family-centric small town, never really left Southern Treasures. His ghost hung around, and recently he's started talking to me.

Now, I don't understand how this all works, and he hasn't exactly explained it, but when the local football star got killed in a car crash, Bluebeard told me it wasn't an accident. And he was right. Well, that is, Uncle Louis was right.

Do you see how confusing this all is?

Just imagine trying to explain to your friends that you're living with a ghost of a long-dead relative, who just happens to talk to you through a parrot.

I've asked him what he's doing here, and why he waited almost twenty-five years to say anything, but he doesn't answer. He just keeps making sideways remarks until I puzzle out what he's talking about.

Problem is, figuring out his cryptic messages can get me into trouble. Like coming face-to-face with a murderer.

You would think he'd try to keep me safe, but that apparently isn't his job.

It's not like he wants to leave, either. Despite what you see on TV, this is one ghost that isn't interested in moving on, or crossing over, or whatever it is that ghosts do.

No, Uncle Louis is intent on hanging around, flirting with every pretty girl that comes in, getting me into trouble, and meddling in my love life.

Did I mention, I'm starting to kind of like it?

After all, family is where you find it, and I think I've found mine, with Uncle Louis, and the friends who know about him.

So, you may think this is crazy, and you're free to disagree, but I believe in ghosts, how about you?
Submitted by Janet Bolin