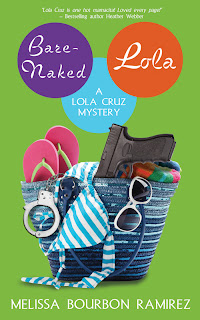 An Interview with Manny Camacho

I walked into Camacho and Associates with my nerves on edge.  This was my first interview with a larger than life character.  The office was bustling with activity, not something I had expected after hours.
“Manny, you’re six o’clock is here!”  The clerk, Reily, yelled back to her boss as she dug through folders on her desk.
“Send her in.” His deep voice resonated through the office.  Everyone in the office looked up—Reily had stopped shuffling files, Lola’s telephone conversation paused, Sadie turned toward me from the white board she was scribbling on.  Even the camera, mounted above the clerk with the unorthodox hair color, stopped zipping around.  All eyes were on me.

I threw back my shoulders and walked into Manny’s office like I owned the place.  After all, the author had sent me.
Manny was sitting behind his desk with his feet propped up on the edge.  His size would have intimidated me, if Melissa hadn't created him.  In his hand the paper with my questions crinkled under his scrutiny.  I glanced at the trash can full of wadded up paper.
Would he dare, do the same to my list of questions?
Without looking at me, he said, “Have a seat Ms. Roberts.  As I told you on the phone, I am only doing this because I am indebted to Melissa—otherwise, you wouldn’t be here." His eyes finally lifted to meet mine.
Dios mio, the man could see into my very soul.  I gulped down the fear threatening to turn me around and walk me out the door.  Then I made myself comfortable in the brown leather chair in front of his desk, never allowing my eyes to stray from his.
"Thank you, Manny. Can you tell my readers about yourself?"
His hand rubbed across the stubble on his jaw, before he finally answered.  "My name is Manuel Camacho.  People who know me well call me Manny.”
He stopped.  Surely that wasn’t all?  I waited, and he went on.

“I became a cop to help the people of my Latino community in Sacramento.  When my job was taken away, I thought that was it.  Then I opened Camacho and Associates Private Investigations and everything changed.  The business became me, and I became the business.  The uniform that had defined me had actually hidden the true me.  Now I know freedom in my alligator boots.  I have wisdom through pain. And I know how to deliver justice.”
"Pain? What pain?" Melissa had told me his history.  It wasn’t that dark...was it?
"You promised this would be quick." He tapped on my list, making me wonder how it didn’t tear under the force of his finger. "Next question."
“Of course, Manny."  Somehow I sounded like I worked for him and he wasn’t just a character in my friend’s book.  "How old are you?"
“Old enough to know Dolores would be trouble if I allowed our relationship to extend beyond boss/employee—young enough not give to a damn when she grinds against me at the salsa club.  But I won’t give in to the lust—not yet.   She is young and talented and believes she lost her innocence years ago—she’s naïve.  Her dark day will come, but it won’t be by my hand.  I’ll be there to pick up the pieces.  I’ll make her better than I am—which is damn good.  God help the man who gets in her way.”
I was losing control of this interview fast—Lola wasn't going to have a dark day—Melissa would’ve definitely told me about that.  I started to protest, but he stopped me by tapping on the expensive watch on his wrist.  I stuck to the script.
"How tall are you?"
“6’2”.  Tall enough to discourage the amateurs and large enough to match up against any opponent.”
My spine bristled with his answer. Or was that a tingle.  Obviously, Manny put me in the amateur category, but still, I was turned on. I made my voice harden. "How much do you weigh?"
“215lbs- a weight that serves me well. No one will ever stop me again.”

I could tell the man was purposely trying to goad me.  I’d interrogated men who’d done heinous acts of violence against the innocent, he was nothing compared to them.  But he wanted me to stray from our agreement so he could stop the interview short.
I refused.  "Tell my readers your hair and eye color."
His feet came off the desk, and suddenly I felt as if he was telling me I’d better finish quickly.  Instead my eyes were drawn to the curls gliding through his impatient fingers as he brushed back his hair.
“Only women worry about that.  Tell them everything about me is dark.”
I gulped down the stirring he caused.  "What is your favorite food?"
“Food is fuel, not fun.  If I have a weakness…and I’m not saying I do, it is for the Cruz family tamales.”
"Give me a break Manny, I know your weaknesses..."
My list crumpled in his hands.
Aye, carumba. I still had more questions about the job, the cases, the agency.
I blurted out the one his fans wanted answered. "How do you show a woman a good time?"
“How do I show a woman a good time?" His gaze traveled the length of me.  "Ms. Roberts, if you must ask—I will show you.  But I don’t think Melissa will approve of you stepping into her story.”
He sent my list sailing through the air.  It would have swished through the net if we’d been on a basketball court.  Instead it landed on the rest of the trash in the metal bin.  Manny opened a folder on his desk.
“If you’ll excuse me, I have a client waiting and a criminal to put behind bars.  Dolores, ven aqui!”
Like a secretary, I'd been dismissed, and I bent toward his will.
But nothing was over between us.  Manny would learn his place...this I vowed.
Interview by Kym Roberts

**There's a discussion going on at Goodreads:  Team Jack or Team Manny?  Weigh in HERE!

Melissa Bourbon, who sometimes answers to her Latina-by-marriage name Misa Ramirez, gave up teaching middle and high school kids in Northern California to write full-time amidst horses and Longhorns in North Texas.  She fantasizes about spending summers writing in quaint, cozy locales, has a love/hate relationship with yoga and chocolate, is devoted to her family, and can’t believe she’s lucky enough to be living the life of her dreams.

She is the Marketing Director with Entangled Publishing, is the founder of Books on the House, the co-founder of The Naked Hero, and is the author of the Lola Cruz Mystery series with St. Martin’s Minotaur and Entangled Publishing, and A Magical Dressmaking Mystery series with NAL.  She also has two romantic suspense novels, and is the co-author of The Tricked-out Toolbox, all to be released in 2012/2013.

Going undercover is second nature for Private Investigator Lola Cruz, but she’s out of her league when the case of a murdered Royals Courtside Dancer leads her to a local nudist resort. Parading around the sidelines of Sacramento’s professional basketball scene in a barely-there cheerleading outfit is one thing—but parading around in nothing but smile? If she has any chance of hiding this from her traditional family and on-again/off-again boyfriend Jack, she’s going to have a lot more than her duct tape bra and killer dance moves to keep under wraps…