How to Party with Presley Parker 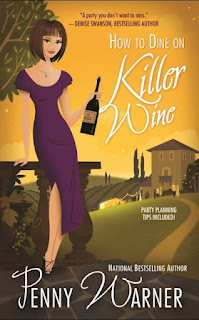 by Presley Parker, party planner from the Party Planning Mystery series by Penny Warner: HOW TO HOST A KILLER PARTY, HOW TO CRASH A KILLER BASH, HOW TO SURVIVE A KILLER SÉANCE, HOW TO PARTY WITH A KILLER VAMPIRE, HOW TO DINE ON KILLER WINE.

Presley Parker—in the house! Thanks for the invitation. My RSVP is below.

For those party people I’ve not met yet, I’m a party—I mean event planner—who seems to have more party fouls than most. I mean, how often does a dead body turn up at your party? Once? Maybe twice?

Certainly not more than that. I don’t know why this happens to me. I got into this business because I wanted to show people a good time (without putting my number on the bathroom wall) and at the same time help raise money for a good cause (chocolate addiction, etc.)
But after my first party, HOW TO HOST A KILLER PARTY, ended so badly, it’s a wonder I’m still in business. It was supposed to be a surprise wedding for the mayor’s fiancé—but she ended up floating in the San Francisco Bay. As you can imagine, everything went downhill from there. Still, who plans a “surprise” wedding for a woman? That’s just nuts. We girls have been planning our weddings since we were three years old. No wonder the bride-won’t-be ended up dead. There was nothing left to live for. Am I right?
So my next party, HOW TO CRASH A KILLER BASH, was held at the prestigious de Young Museum. Who knew an artful killer lurked among the art and artifacts? I probably shouldn’t have planned a Murder Mystery theme, but they’re all the rage and I thought it would make a great fundraiser. I just didn’t count on the person playing the victim to end up with an artifact in her back.

I was so excited about HOW TO SURVIVE A KILLER SÉANCE, since it was set at the mysterious Winchester Mystery House.  Talk about the perfect place for a murder. But a real murder wasn’t part of my plan. I mean, just searching for a dead body in that 140-room mansion would take hours. But as fate would have it, someone turned up dead right after I brought deceased Sarah Winchester back to life in the séance room. With this kind of luck, I should play the lottery.

I thought about giving up the whole business when a friend asked me to host HOW TO PARTY WITH A KILLER VAMPIRE. He’s a movie producer who films on Treasure Island where I live and work, and I just couldn’t say no (he promised me a part in the movie). But I should have turned it down when I found out he wanted the party held in a local cemetery! Talk about atmosphere….Warning: When you add a real dead body to a post-production vampire film, all hell breaks loose.

For my latest party, I was asked to host HOW TO DINE ON KILLER WINE, a wine-tasting event in the Napa Valley wine country! The host owns a Tuscan-style villa there and wanted to showcase his latest wine, along with a few amuse bouches (yeah, I had to look it up too. Means “small bites.”) Anyway, when a body is found under the wine-tasting table with a corkscrew in her back, I realized there wasn’t enough wine on the planet to help me cope with the aftermath. Did someone say “screwed?”

But partying is in my blood (so to speak). I had my first party when I was two. It was a simple affair—just pretend tea, some pretend cookies, with my teddy bear and dolls as guests. By the time I got to college, I had really developed a skill for partying. Unfortunately, the university I was attending asked me to “party elsewhere,” since they didn’t offer a degree in “Partying.” Party poopers.

I can only hope my next gig is something nice and quiet. Maybe a simple “Hot Flash Bash” or “Barbie and Ken Go Redneck Party.” I can’t take any more murders. My crime scene cleaner boyfriend is great at getting blood out of the carpet, but I think he’s tired of it. Oh well. Wait until I throw him a surprise party for his birthday.  I’m sure he’ll love it. I’m planning a “Hunger Games” party theme, where the guests try to kill each other and be the last survivor. Should be a killer party!

Penny has generously offered to give away a copy of one of her books. The winner will be chosen from one of today's commenters. How about giving Presley an idea for a nice and quiet party to plan??????
Submitted by Janet Bolin