Back to School Blues


by Annie Chamovitz from Scrapbook of Secrets, the first in the Cumberland Creek Mystery series by Mollie Cox Bryan 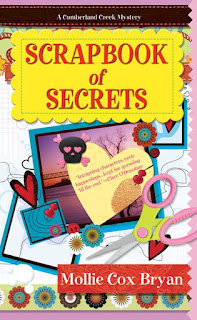 Annie Chamovitz is 36-years-old and has “retired” from the rough and tumble world of Washington, D.C., investigative journalism. She and her husband Mike moved to Cumberland Creek. Va., from Bethesda, Md., a tone suburb.  Her family is the only Jewish family in town.  She juggles being a stay-at-home mom to Sam and Ben with freelance journalism. After being in Cumberland Creek about a year, she was invited to a weekly scrapbooking crop. She goes to the scrapbook gathering—reluctantly. Visions of frilly stickers and glitter paper dissuade her. Soon, she is part of the group, finding she loves the “puzzle” aspect to scrapbooking, which surprisingly lends itself well to solving murders, too.

Okay. So it seems like we’ve been preparing for this day all summer. First day of school. My guys are off to school.
When the kids first received their supply list, I thought, “You’ve got to be kidding. “ But after a quick phone call to the school, I was assured that yes—Ben would need the 30 items on his listed and Sam the 44 items on his list. In elementary school?
That’s one of the many changes between when I went to school and now. In school, they provided everything for us—tablet paper, pencils, art supplies and even tissue paper. I could not believe the expense. Several hundred dollars—and that doesn’t include new shoes and jeans the boys need because they've grown so much..
Sigh.
But we’ve been preparing in other ways, too, this is the first year Ben will be in school all day. He’s a good kid, smart, and sometimes appears to be wiser than his years. But my five-year-old son has been reverting back to some of his baby-ish ways over the summer. I suspect it’s when he starts thinking about going to the big kid’s school with his brother. And even though he doesn’t want to admit it, I’m sure it makes him nervous.
He hasn’t wanted me to read to him for least a year. He knows how to read and likes to read to himself. I miss reading to him. I long for the days when we snuggled up together in his bed and read one book after the next.
I mentioned it to my husband Mike, who takes a firm stance about this.
“Don’t baby him,” he said.
“Honestly Mike, he’s five,” I said.
“Still,” he said. “He’s moving forward and that means we’ve done our job. Don’t pull him backwards.”
Maybe he’s right, but my stomach still churns when I think about it. Funny how I can be so sure and confident about some things. But parenting? Nobody can ever be sure, can they?
A couple of weeks ago, Ben actually came to me and asked me to read to him.
“Of course, baby, I’ll read to you. What would you like to hear?”

My heart nearly exploded when he handed me the book. It was always one of his favorite bedtime stories—“Mama Do You Love Me?” by Barbara M. Joosse. A book about an Eskimo girl coming up with different scenarios she might get herself into and then asking her mother if she would still love her if she did so. Of course, the mother's love was boundless.

I snuggled up next to Ben in bed that night, almost knowing the words to his favorite story by heart. Still, we followed along, him and I—Ben pointing to the words as I said them out loud. Both of us pausing to look at the lovely illustrations. Then my sleepy boy fell into a deep slumber.

That might have been the last time I read the book to him, who knows? The next day, he didn’t ask for me to read to him. And when I asked, he shrugged and said he wanted to read another book on his own.

But today, when we were getting ready to walk to the bus stop, he turned and hugged me and whispered to me, “Mama, do you love me?”

“Yes, I do dear one,” I said, not missing a beat from the book we had read for years.

I’m a writer and know the importance of language and story. Sill, I am in awe of it when I see it working in every day life—which brings home the point of making sure our kids read good books with powerful messages. What are some of your favorite children’s books?