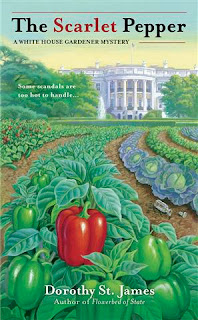 By: Aunt Willow, a humble gardener
From The Scarlet Pepper: A White House Gardener Mystery by Dorothy St. James

For the past couple of weeks the attention of the world has been turned toward London and the 30th Summer Olympics. I might not know anything about sports, my life has revolved around my Mama's garden, but even I have been sitting on the edge of my seat watching the athletes in their quest for gold with rapt attention.

What is its about the Olympics that can make even someone (like me) who feels nothing but indifference about sports park herself in front of the TV for days on end? Especially when there are weeds growing, well, like weeds in the garden.

I mulled this over while watching the team synchronized swimming finals yesterday. (Canada's show blew me away!) And I think the answer is, the Olympics are a snapshot of what we want in our own lives.

So now that the Olympics is drawing to a close, you can find me out in the garden again. But things won't be the same. I'm going to carry that Olympic spirit in my heart. You'd better believe I will! And my garden will bloom brighter because of it because you don't have to be a world-class athlete to accomplish world-class feats. You can be a mother. An office worker. Or even a backyard gardener.

To quote Winston Churchill, "Attitude is a little thing that makes a big difference."

What is your everyday Olympic event?

* * * * * * *
Dorothy St. James writes the White House Gardener Mysteries for Berkley Prime Crime. Flowerbed of State is the first book in the series. Be sure to grab your copy while they're still available! Visit with Dorothy on the web or at Facebook. Or follow her onTwitter.

Praise for FLOWERBED OF STATE:
"Credible characters, a fast-paced plot, and a light look at political life in Washington, D.C., will delight cozy fans." ~ Publishers Weekly
Order Flowerbed of State from your favorite bookseller.

Praise for The Scarlet Pepper:
"Itching to get out there and dig in the dirt, but don’t quite have the energy to pull yourself up off the couch?  Read The Scarlet Pepper by Dorothy St. James.  It’s a heckuva whodunit, and it’s practically gardening via proxy – what better compromise could you hope to find?" ~ The Season Blog

"A potboiler of homicide, blackmail, journalism, power and sex - but one that St. James handles with taste as well as verve - “The Scarlet Pepper” fulfills the promise of last year’s series debut, “Flowerbed of State,” and then some." ~ Richmond Times-Dispatch
Order The Scarlet Pepper from your favorite bookseller.
Submitted by Dorothy St. James/Dorothy McFalls