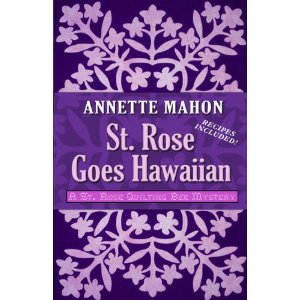 (Meet Edie Dulinski, a slightly acerbic character and an excellent quilter. She worries about crime, gang violence and terrorism, but she’s always willing to help out her friends. And she’s the best at computer searching when they put on their detective hats.)

It’s so good to be back in Scottsdale. Our trip to Hawai`i was wonderful, and I enjoyed all the quilt sessions. But to think that even there we got involved in a murder! At the big luau we attended, our hostess’s husband was murdered—right there in front of everyone, and no one the wiser! And of course Clare was impossible, whining about how this could happen right in front of us. She thinks she’d like the excitement of being there for a murder, but I doubt she would. Of course, we were all there this time, not that we knew it. And Clare insisted we get involved, practically told the hostess we were detectives. Of all things!

I don’t know how the St. Rose Quilting Bee has gotten so mixed up in murder. I blame Maggie of course. Not that she’s not a wonderful person. She founded the Bee, and she had the idea of auctioning off the quilts we make. That brings in much more for the parish than selling them at the bazaar ever would. But it was the murder of her sons’ childhood friend that first got us involved in solving a murder. And then of course Clare has managed to keep us involved with all her interest in mystery fiction and her firm belief that Kenny Upland was innocent. But that’s another story.

The worst part of the murder at the luau was sifting through the suspects. In the past, our advantage has been our knowledge of the suspects through the church or the neighborhood. But in Hawai`i we didn’t know much about the victim much less who might have wanted him dead. And we had to look at those in our little group too, unfortunately. For a while there I even thought I might be rooming with a murderer. Not a good feeling.

That said, it was an excellent trip with lots of good quilting information imparted. Still, it’s good to be home. I’ve finished up the Hawaiian style pieces I started while we were gone, and I’m starting a new top for the Bee to quilt. An Ocean Waves, in honor of our trip. I do get excited about starting a new top, choosing the fabrics … It’s going to be a good day.

Annette Mahon writes romance fiction with Hawaiian settings (and multicultural heroines) and cozy mysteries set in Scottsdale, Arizona.When not writing, Mahon works on her quilts. She is addicted to appliqué work, both Hawaiian quilting and the more elaborate Baltimore Album style quilts. Samples of her work have appeared in Appliqué! Appliqué! Appliqué! by Laurene Sinema, Papercuts and Plenty by Elly Sienkiewicz, Quilters’ Newsletter Magazine and Quilt Japan magazine. Annette enjoys putting quilts into her novels. Her mystery series features a group of women who belong to a quilting group--and solve mysteries over the quilting frame!
A native of Hilo, Hawai`i, Annette has lived in Arizona for many years. She is a member of Romance Writers of America, Mystery Writers of America, Sisters in Crime, Novelists, Inc., and the Authors Guild.