Cat Shows Can Be Purrplexing 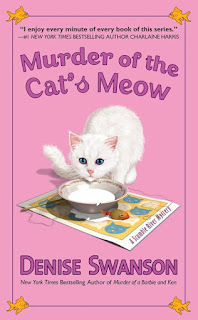 I can’t believe how fast the time has flown. My biographer, Denise Swanson, tells me another book about my adventures came out on Tuesday. This one is called Murder of the Cat’s Meow. It’s all about what happened when Bunny Reid (my ex-boyfriend’s Las Vegas showgirl mother who now runs a bowling alley) decided to earn some extra cash by creating an online matchmaking site called CupidsCatsMeow.com. Although her two co-conspirators, Frannie Ryan and Justin Boward have tried to explain it to me, I still have no idea how the matchmaking service turned into a cat show/speeding dating weekend.

What I do know is that a completive event like a cat show does not bring out the best in people. What I didn’t realize, although I should have considering my track record, was that it would result in murder. And the motive for this murder was a real shocker!

This whole business couldn’t have come at a worse time, considering how busy I was trying to cleanse my house of the previous owner’s spirit. Boy did that go wrong.
Previously, she’d only bothered me if Wally and I were trying to ‘you know what’, but evidently trying to get rid of her, really riled her up, and now I have a ticked off ghost to deal with.

Then there was the whole brouhaha at school. We should have had that week off for spring break, but due to a winter flu epidemic, not only was I working, I had to deal with a group of girls who had gotten into big trouble at a Saturday night sleepover. The situation ended up spreading like wildfire through the whole school, and parents were up in arms. As usual, Homer pushed the whole thing into my lap. I wonder when he’s going to retire. We really need a new principal ASAP.

On a bright note, my friend Spike Yamaguchi was in town. Her life has taken a big turn for the better and it was great catching up with her. Except for the fact that my ghost won’t let us ‘you know what,’ things are going well with Wally. He and I had two pieces of good news, but I don’t have time to go into all that right now. If you’re interested, you can read about it in Murder of the Cat’s Meow.

Have you ever been to a cat show? What do you think of them?