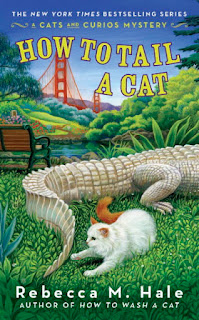 by Clive the Albino Alligator
from HOW TO TAIL A CAT,
the fourth in the Cats and Curios mystery series
by Rebecca M. Hale

Just the thought of them makes my stomach rumble with anticipation. Fish pellet feedings are the highlight of my day here at the California Academy of Sciences. Sometimes, the splatting sound of a pellet hitting the water is about the only thing that can lure me off my heated rock.

What’s that? You’re not familiar with this tasty delicacy? Oh, you don’t know what you’re missing.

First, they take a bunch of fish – maybe a crab or two depending on the season – and chop them up into teeny, tiny bits. Once they’ve got a good mix of oily, gooey, tasty parts, they pack this yummy slurry into disc-shaped molds. After about an hour or so in the oven, out come fabulous round biscuits!

I know, right? You’re getting hungry just reading this, aren’t you?

Fish pellets – there’s nothing like them. Hands down, the best food in San Francisco.

What else do I eat? I don’t understand the question. Why would anyone eat anything else when there are fish pellets around?

Chicken? No, that’s not for me. My stomach can’t take the feathers.

What about cats??!! Look, you’ve got the wrong impression here. I’m a sophisticated alligator, an ambassador for my species, a local celebrity in San Francisco. I can’t be running around town eating people’s pets. That would be a public relations disaster – and to be honest, I’m a little scared of that Isabella feline. She means business, that cat.

A human? Sigh. Where do you get these ideas? I would never do such a thing. Especially not to one of my young fans. After all, those children are the ones who keep the Academy in business. It’s their funding that supports my fish pellet addiction. Have I mentioned how much I love fish pellets?

Montgomery Carmichael? You mean that tall skinny bloke who thinks he’s got a shot at becoming Mayor? Well, hmm, now that’s another matter entirely. Him I might just have to…