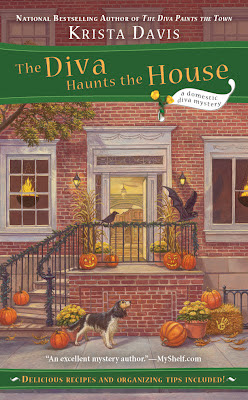 Pumpkins and gold mums have begun to appear at the front doors of the houses on my street. The air has turned crisp and a few leaves are beginning to skitter along the sidewalks.

If you have never been to Old Town, Alexandria, it's sort of Williamsburg-ish in flavor. You can almost feel the presence of previous residents who lived there one or two hundred years ago.

There's a popular TV show right now in which a medium says she might look like a large, but she's really a medium. So I can't help thinking of the medium who came to my house for my niece's birthday party last fall.

We all snickered when she got some things very wrong. For instance, she told us about a woman in a ball gown who recalled a party in my living room in 1860. Except that my ex-husband's Aunt Faye added that room in the 1970's. Whoops!

But some people, including me, think Aunt Faye is the ghost in my kitchen. So I'm not entirely sure that mediums can't speak to the dead. My quite lucid and rational former mother-in-law stops by to talk, not with me, but with her deceased sister, Faye, in my kitchen. Who am I to say they're not actually communicating?

So much that we hear and read about ghosts is scary. But if there are ghosts, surely Casper isn't the only friendly one. Faye has always been a kind presence, well, except when Natasha is in my kitchen. The portrait of Faye over the fireplace always swings to a slant when Natasha comes over.

So what do you think? Are there ghosts? Can mediums speak to them?
Submitted by Krista