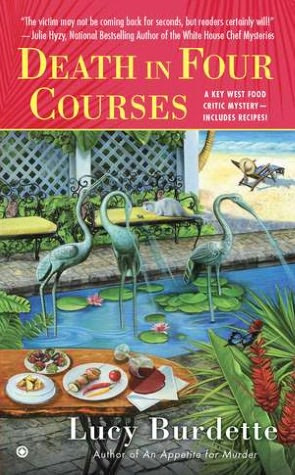 
As the new food critic for Key Zest magazine, Hayley Snow went from being a culinary groupie to one of Florida’s cutting-edge tastemakers. But as always, when life serves Haley a dream come true, it comes paired with a most exquisite murder....

The annual Key West literary conference is drawing the biggest names in food writing from all over the country, and Haley is there to catch a few fresh morsels of insider gossip. Superstar restaurant critic Jonah Barrows has already ruffled a few foodie feathers with his recent tell-all memoir, and as keynote speaker, he promises more of the same jaw-dropping honesty.

But when Hayley discovers Jonah’s body in a nearby dipping pool, the cocktail-hour buzz takes a sour turn, and Hayley finds herself at the center of attention—especially with the police. Now it’s up to her to catch the killer before she comes to her own bitter finish.

For more information or for links to buy a copy, visit Lucy Burdette's website. 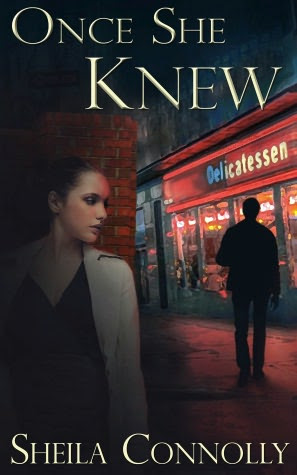 Once She Knew
by Sheila Connolly

Available in eBook from Nook First September 3. Available from all other major ebook retailers October 3.

From New York Times bestselling mystery author Sheila Connolly comes a brand-new book that blends her skillful mystery talents with a touch of romantic suspense. There’s no doubt this book will appeal both to her current mystery audience as well as those readers who love authors like Lisa Gardner or Karen Rose.

Claire Hastings, professor at a prestigious women’s college, has retreated to an isolated cabin in Maine in midwinter to work on the book that will guarantee her tenure, but she’s having trouble finishing it. Then disgraced journalist Jonathan Daulton stumbles into her cabin late one night, soaking wet and bleeding from what seems to be a gunshot wound. She recognizes him from a romantic encounter at a conference years earlier, one she’s been trying desperately to forget. Much to her relief, and embarrassment, he doesn’t appear to remember her.

When Claire learns that Jonathan is suspected of killing an FBI agent, she urges him to turn himself in immediately, but Jonathan has other ideas, all of which involve her. As he points out, if the FBI finds that she has been harboring a fugitive, she can forget about that peace and quiet she wanted. Then he shocks Claire by faking her kidnapping.

Entangled in whatever Jonathan’s mysterious troubles are, Claire finds herself on a frantic odyssey from Maine to New York City, figuring that the only way to clear her name is to clear Jonathan’s. As Jonathan gradually reveals that his real goal is to stop what he believes is a terrorist plan to assassinate the First Lady at a United Nations event, Claire knows she’s in over her head.

For more information or for links to buy a copy, visit Sheila Connolly's website.

In her 9th adventure, Pepper Martin has a new ghost on her hands, a murdered spirit who leaves puddles everywhere.  The dead man is her ex-boyfriend Quinn's former partner, Jack Haggarty--and he isn't going away until Pepper figures out the real reason behind his murder.  And while Quinn recently had a brush with the afterlife, he still isn't ready to accept Pepper's abilities to talk to the dead--or offer his skills as a detective.  Now, Pepper has to convince Quinn she's the real deal and investigate Jack's death--before someone else meets their end in a watery grave.

For more information or for links to buy a copy, visit Casey Daniels's website. 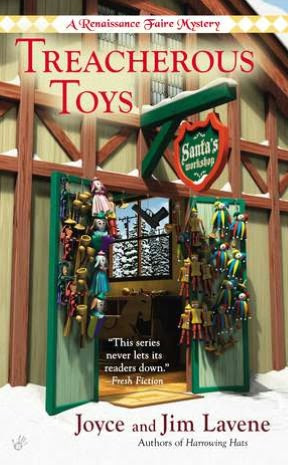 by Joyce and Jim Lavene

Hail ye, hail ye, and welcome to the Renaissance Faire Village. Here, associate professor Jessie Morton spends her summers honing her skills and finding the lady, lord, or serf whodunit. But when she comes for Christmas, will murder mean a very unhappy holiday?

Jessie Morton is getting just what she wished for this holiday season at the Renaissance Faire Village—working as an apprentice to the new toy maker. But when Chris Christmas is discovered dead just hours after her arrival, Jessie’s holiday plans start to melt away.
Jessie can’t imagine who would want to silence the toy maker, but apparently the red-cheeked Chris Christmas liked toying with the ladies. Although it may be her shortest apprenticeship ever, she wants to unwrap the truth before word gets out in the village that it’s not safe to be Santa—or one of his helpers…

For more information or for links to buy a copy, visit Joyce and Jim Lavene's website. 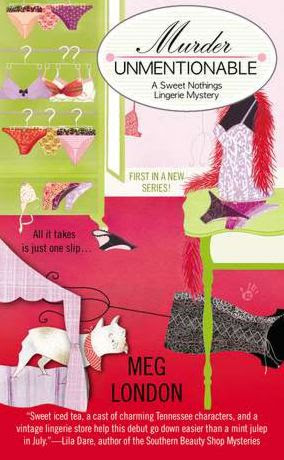 Emma Taylor leaves her job as a stylist in New York City to return home to Paris, Tennessee to help her Aunt Arabella renovate her lingerie shop, Sweet Nothings. When Emma discovers that Arabella has a cache of vintage lingerie, Emma realizes they have hit on a fabulous theme for Sweet Nothings. Unfortunately she also discovers a dead body and enough secrets to make everyone in town look suspicious! Emma ends up facing down a murderer with nothing but a bullet bra for a weapon!

For more information or for links to buy a copy, visit Meg London's website. 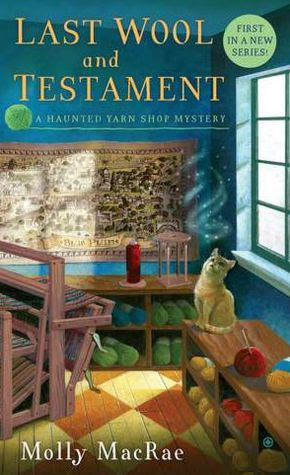 Kath Rutledge is about to learn the true meaning of T.G.I.F.—Thank Goodness it’s Fiber…

That’s the name of the spunky group of fiber and needlework artists founded by Ivy McClellan, Kath’s beloved grandmother. Though Ivy has recently passed on, the ladies still meet regularly at her fabric and fiber shop, The Weaver’s Cat, which Kath has now inherited. But that’s only the first in a series of surprises when Kath returns to the small town of Blue Plum, Tennessee, to settle her grandmother’s affairs.

There’s been a murder, and it turns out her grandmother was the prime suspect. Before she can begin to clear Ivy’s name, Kath encounters a looming presence in the form of a gloomy ghost. It turns out the specter has just as much interest in solving the murder as Kath. So, with a little help from the ladies of T.G.I.F.—and a stubborn spirit from beyond—she sets out to unravel the clues and hook the real killer…

For more information or links to buy a copy, visit Molly MacRae’s website. 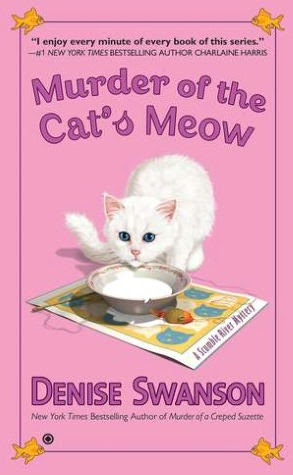 Murder of the Cat's Meow
by Denise Swanson

When ex-Vegas show girl Bunny Reid starts an online dating matchmaking service called the CupidsCatsMeow.com, it morphs into a cat show/speed dating event at her bowling alley. When a judge's body is found strangled, it's up to school psychologist Skye Denison to solve the purrplexing mystery. Will her sleuthing skills be the cat's meow?

For more information or links to buy a copy, visit Denise Swanson’s website.