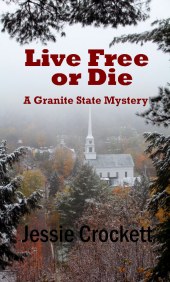 by Augusta Hathaway for Jessie Crockett
from Live Free or Die, The Granite State Mysteries

There is a persistent idea in our culture that firefighters are great cooks. Sadly, this is not always the case. Take my sister, Gwen, chief of her fire department  in Winslow Falls, NH, for example. She’s such a bad cook she gives herself paper cuts removing the wrapper from a toaster pastry. Fortunately for her, there are a lot of people in her orbit who don’t want to see her starve. Like myself or her new beau, Hugh, a tall, red-headed and handsome investigator with the Fire Marshal’s office.

Just last night, Hugh dropped by with a pot of stew he’d whipped up to share with her on a cold and rainy evening. Things were looking pretty cozy when I got there with a table for two laid by the fireplace and a Scrabble board set out with only two letter trays. I would have felt bad about interrupting a romantic evening but the food smelled too delicious to resist. Besides, by the time Gwen added a chair for me, the sump pump in the basement started acting up. Any thought of the evening taking an amorous turn was drowned out by an ominous gurgling and the worry that Gwen’s furnace would be underwater before morning.

I did feel just the tiniest bit guilty about staying up where it was warm and dry rather than standing around in the basement pretending I had any idea how to help fix things. So, I did what I could to salvage the evening and finished off the stew, taking careful note of what was in it in order to recreate it another time. I asked Hugh if I had gotten it about right when he came up about halfway through the repair process from the basement for a cup of coffee. He said it is one of those things that comes out differently every time he makes it and that the recipe should be treated like a jumping off point. If you are more culinarily inclined than Gwen, you might want to give it a try.

Go to your fridge and pull out any fleshy vegetables that seemed like a good idea in the market but never did once you got them home and are now threatening to expire. Good examples are summer squashes, eggplants, celery, carrots and beets. Don’t worry if they are limp but don’t use them if they are becoming slimy. Pile on any tomatoes sitting around on your counter, if you have them. Dig round in your pantry and pull out some onions, garlic, sweet potatoes or winter squash in any proportions you like. Peel anything that absolutely needs it and chop all vegetables into chunks too big to chew but smaller than a breadbox. You need enough to fill the bottom of that broiling pan that comes with every oven.

Toss the prepared vegetables with a bit of olive oil and pepper. Heap into the pan and roast at somewhere around 375 degrees until you can squish the vegetables into a chunky paste with the back of a spoon. Stir it every now and again. Some charred bits make it even better. This will probably take around an hour, but it depends on the types of vegetables and the size of the pieces.

Scrape all the vegetables into a soup pot on the top of the stove. Add a couple of cups of water and a cup of lentils. Shake in any herbs you happen to like. Cook over medium heat until the lentils are falling apart, giving it a stir every now and again. Before serving add salt to taste and if you like spicier flavors as much as Gwen does, swirl in a good sized blob of curry paste like Patak’s Madras Curry. Enjoy!

You can learn more about Jessie Crockett and her current and upcoming books at www.jessiecrockett.com.