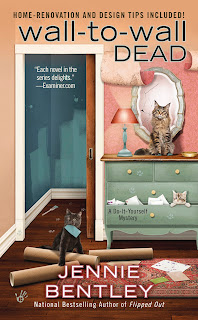 by Avery Baker, from Jennie Bentley’s Do It Yourself home renovation mysteries

There’s been a lot going on since the last time I was here. Derek and I finished renovating the big house on Rowanberry Island, did you know that?

And then the TV crew came to town, from the television company my stepfather Noel works for. A week long stint of them filming Derek and me renovating Tony Micelli’s house on Cabot Street killed Tony, and damn near killed me too, and I’m not just speaking metaphorically. The same person who stabbed Tony with a screwdriver tried to burn down my garden shed with me inside it, and I barely got out with my skin. Yet another non-metaphorical expression.

The day the TV crew left, Derek borrowed Jill and Peter’s boat and took me out to Rowanberry Island. We still own the house out there, the weather was nice, and we both needed a break after everything that had happened.

Now, tuna fish may not sound romantic to any of you, but I fell in love with Derek over tuna fish sandwiches at my Aunt Inga’s kitchen table last summer.

He rushed through eating, but I didn’t think much of it, since Derek is usually hungry, and since there were whoopie pies for dessert. Any time is a good time for a whoopie pie, so when he handed me mine, I unwrapped it and opened my mouth, ready to sink my teeth into it.

And almost ate Derek’s mother’s engagement ring, that Kate had half-buried in the chocolate cake.

Derek wants to get married in October, so it’s going to be a busy few months. We still have a lot of work to do on Tony’s house—Melissa’s house now, I guess, since he left everything to her. (Wonder how she’s going to feel about Derek getting remarried, by the way?)

And Josh Rasmussen wants us to stop by and look at a condo on the floor below his, because the owners have moved to Florida full-time—tired of the snowbird migration twice a year—and they’re thinking of selling. Josh thinks we could get it cheap and flip it quickly. That would be nice, since we could use a little extra money for the wedding. Melissa has been trying to sell the house on Rowanberry Island for the past several months, but people with enough cash to buy a half-million dollar house on an island off the coast of Maine, don’t grow on trees. It’ll be a while until we get our money out of that again. Derek isn’t very excited about the concept of the condo—not historical enough—but as I remind him, at least it won’t sit on the market for a year after we finish renovating it, the way the house on Rowanberry Island looks like it might.

Yes, I have high hopes for the condo, and for a nice, simple, quick renovation—with no dead bodies for a change.

It isn’t a lot to ask for, is it? I mean, I would like to survive to attend my wedding to the man of my dreams.

Anyway, that’s my news. What about you? Got anything good to share?

Jennie Bentley writes the New York Times bestselling Do It Yourself mysteries for Berkley Prime Crime. Designer Avery Baker and handyman Derek Ellis made their debut in Fatal Fixer-Upper in 2008. The complete story of the proposal (and wedding) can be found in book 6, Wall to Wall Dead, which was released on September 4th. For more information about the DIY series (and Jennie’s other works) please visit her website, www.jenniebentley.com
Submitted by Janet Bolin