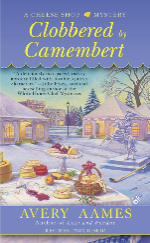 From the award-winning Cheese Shop Mystery series by Avery Aames

I love working in The Cheese Shop. I can't ever get enough of the aromas. The cheese. The baking that my boss Charlotte does. Wish I could cook like her. She takes real pride in it. Not that we're a restaurant or anything. We're not. The Country Kitchen is across the street, and we would never think of competing outright. We just have some specialy items to lure people in just in case their scared of cheese, you know?

Scared, as in, they don't eat much of it and certainly not cheese with funny names. When I first started working here, I wasn't so sure myself. I came from an Amish background. We ate Amish cheese, which is pretty plain. The milk is fabulous, but the cheese, just regular.

Then I found Fromagerie Bessette and I fell in love. With cheese. Charlotte helped me understand some of them. The fancy ones. Like Morbier. It's made with two pourings of milk and has this ash in the middle. [I'm just now getting the hang of how to pronounce a lot of these French words.] And I like triple creams. So smooth and satiny. Oh, and I also like Manchego, that's a sheep's cheese that's nutty and firm and all around fantastic. And Humbolt Fog, a goat cheese that's sort of tart but fabulous.

After being here a year, I started to experiment with food and cooking. I've made a couple of sandwiches that are pretty darned good. I love melted cheese in a sandwich. It's gooey. Messy. Growing up, I was never allowed to be messy. Except maybe around my grandmother. I miss her. She would be real proud that I'm working where I am. I mean, she probably would have liked if it I had stayed in the fold, as she called it, but I needed to spread my wings. Find out more about life. Try new things. Charlotte says that trying new things is important to a person's inner growth. She takes risks. I'm trying to be more like her.

The first in nationally bestselling A Cheese Shop Mystery series won the Agatha Award for best first novel.  You can learn more about Avery Aames by clicking this link or on Facebook and Twitter. And if you haven't done so, sign up for Avery's mailing list so you can learn about upcoming events, releases, and contests!

You can read more about Rebecca and Charlotte and all the gang in THE LONG QUICHE GOODYBE, LOST AND FONDUE, and CLOBBERED BY CAMEMBERT.  The fourth in the series, TO BRIE OR NOT TO BRIE, debuts February 2013. To read excerpts or order the books, click this LINK

Also, Avery is the pseudonym for Daryl Wood Gerber...who has a new series coming out in July 2013: A COOKBOOK NOOK MYSTERY. Learn more about Daryl by clicking this link or on Facebook and Twitter.

Lastly, take a peek at Daryl's short story, PALACE ON THE LAKE,  in Fish Tales: A Guppy Anthology, which has been nominated for the Agatha, Anthony, and Macavity Awards.