Save the Last Séance for Me

By Dorothy Parker of the Algonquin Round Table Mysteries, by J.J. Murphy

If you’re going to attend a séance, you might as well bring a magician. That’s what I did. And not just any magician. I brought Harry Houdini.

Now this wasn’t any ordinary séance. For one, this séance took place on Halloween night. Full moon, spooky clouds in the sky—the works. For another, we hoped to have a little chat with a chap in the netherworld. Don’t believe it? Well, “nether” did I. And Houdini didn’t either.

You see, Houdini is happiest when he’s debunking mediums, mesmerists and other spiritualists (who are, in his experience, just full of bunk). Now, of course, everyone knows all about Houdini—the most famous magician in the world—so he puts on a disguise, you see. (I put on one as well, just to get into the “spirit” of things.) Then, at the height of the wild witchery, he catches the medium off guard, rips off his fake mustache or wig, and cries, “I am Houdini! And you are a fraud!” Then he proceeds to shred what little credibility the medium has, explaining to everyone how the psychic pulled his or her tricks.

But this Halloween night… This night was out of the ordinary, as I said. We heard an unearthly voice, and it was certainly not coming from the medium (who was no medium, by the way—she was well done). Houdini heard the eerie voice, too.

This wasn’t much fun—and it got even worse when the ghostly voice called out: “Dorothy…”

I decided right then that the only spirits I want to spend time with are the ones that come in a bottle. The only worries those spirits give you are the morning-after kind. And I can deal with those.

Just wake me up when Halloween’s over. 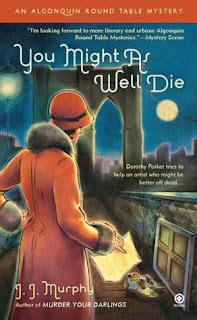 Dorothy Parker lived through this séance in YOU MIGHT AS WELL DIE, the second book in the series. She returns in the third installment, A FRIENDLY GAME OF MURDER, in late December 2012. Join the conversation with Algonquin Round Table Mysteries on Facebook and Twitter.
Submitted by J.J. Murphy