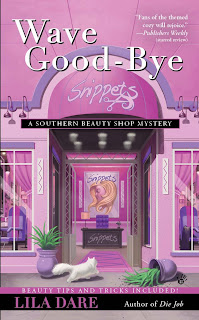 Just because she's married, and has two kids, my sister Alice Rose thinks she's the queen of the world. I think she should stick her crown where the sun doesn't shine. I invited her over to my apartment for pizza and beer to discuss what we were doing on Thanksgiving. Otherwise, she would have planned the whole shootin' match and sent me a memo. For the most part our negotiations were going well, until I explained to her about my dietary limitations.

"Look," I said, "I'm not telling you not to cook a turkey. I'm just saying that I won't be taking any turkey leftovers home, so don't go hog-wild."

"Why not?" she asked, all huffy. "Are you insinuating there's something wrong with my turkey-cooking ability? Honest to heck, Grace Ann Terhune, my white meat is moist, my skin crackles to perfection, and Wade even says I cook a better bird than his mama, and that's going some."

Brother. She had to go drag Wade into it. That was dragging out the big guns. It was the sort of "You might be older, Grace Ann, but I have a husband sort of nastiness" I expected from her.

"Calm down," I said, making placating motions with my hands. "Ever since Sam. I. Am. came into my life, I've quit eating poultry,"

She squinted at me. She's got our mother's blue eyes and platinum blond hair, whereas I have to put highlights in mine or risk being called "dirty blond." After a good long, squint, she said, "Are you telling me that out of deference to a parakeet, you no longer eat poultry? Is that really what you said?"

"Fine," she slapped my table top. "Then you better cook a lot of veggies you like, because you know my boys won't eat veggies, and so I don't make them!"

That was true. Logan and Owen's idea of a vegetable was a bottle of ketchup.

"Got it!" and after that, the rest of our conversation went swimmingly, probably because I opened a Budweiser for her, and since she doesn't usually drink much, she got pretty schnockered.

Of course, my veggies were so good the boys had to have seconds. Don't you know I relished every minute of that! (Pun intended!):

1. Peel one butternut squash and cut into small chunks. Toss with olive oil and bake in 350 degree oven until soft. Some parts will be crispy. That's great!

2. Chop up one Vidalia sweet onion. Cook it slowly until it's translucent. Add equal portions of maple syrup and apple cider vinegar. Continue to cook until mushy.

From our house to yours, have a Happy Thanksgiving and don't let the turkeys get you down!
Submitted by Unknown