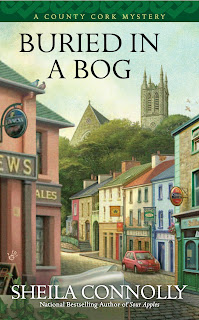 I'm really not comfortable talking about myself, you know?  I mean, if I give you just the facts about me—raised by my grandmother in South Boston, gave up on education after high school, worked at a whole bunch of dead-end jobs, don't have a boyfriend, or much of anybody else now that my grandmother's gone—it sounds like I'm having a pity party, and I don't need anybody's pity.


My gran wanted me to go to Ireland.  In fact, she made me promise I would go, and since she never asked much from me, how could I say no?  So now I'm in Ireland. It's not what I expected.

Gran never talked much about her past—she always wanted to look forward.  She didn't have an easy life, but she made the best of it, and she was always kind to people who had less than she did.  Me, I thought she was wasting her time on losers, but maybe I need to think some more about that.  Now that I'm in County Cork, I'm wondering if that's the way the people here see me.  I don't think I'm a loser.


I thought I'd come over, meet the few old friends of Gran's who were still here, maybe have the local priest say a Mass in the church where she was married, and go back to Boston.  Funny, things aren't working out that way.  I mean, yes, I've met someone who was a friend of hers before she left Ireland, and she's made me see how little I know about my gran's life here.  Besides, she's kind:  she set up an affordable place for me to stay, and she's loaned me a car so I can get around.  And I like listening to her stories.


And now I've kind of stumbled into a job, tending bar at Sullivan's, a small and pretty shabby pub in a small town.  I hadn't seen a lot of customers there, but then they pulled a body out of a bog not far away and everybody's been stopping in at the pub to talk about it.  And they talk to me.  Half of them knew I was coming (is there some kind of weird grapevine around here?), and half of those know more about my family history than I do.


Maybe I'll stick around for a while.
Maura will find herself in Ireland in Buried in a Bog, the first of Sheila Connolly's new County Cork Mysteries, coming in February 2013.
Submitted by Sheila Connolly