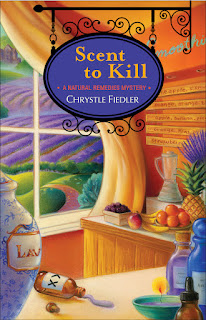 
It’s great to visit Killer Characters again so I can update you on my latest adventure! My new book SCENT to KILL, the second installment of my NATURAL REMEDIES mystery series, documents my efforts to find out who murdered the producer of a new psychic television show. It all started when my hunky ex-cop boyfriend Jackson Spade, and I were invited to attend an exclusive party for the show before production started at a mansion on Long Island’s idyllic East End. However, I was much more interested in visiting the estate’s lavender farm, seeking inspiration for the new aromatherapy workshops I would be holding at my store, Nature’s Way Market Café.


But before the party was over, Roger Bixby one of the producers was dead and the police suspected murder. Roger was working on the show, MJ’s Mind, with Carly Bixby, his ex-wife and the new girlfriend of my ex from L.A., TV writer/producer Simon Lewis. After I left the party, late that night, I got a frantic text from Simon asking for my help. Since Simon had a fight with Roger earlier in the evening, and because of his death is now the primary shareholder in Galaxy films, my ex became the prime suspect. Simon begged me to crack the case and clear him and well, I just couldn’t say no. MJ McClellan, the psychic and star of the show also asked me for help. She hired me to provide natural remedies, including aromatherapy, massage, acupuncture and yoga to soothe the agitated crew of her show.

To find the killer, I had to deal with ghosts in a haunted mansion, a truly dysfunctional family, death threats and “accidents,” while trying to untangle a homicide identical to one committed during prohibition. Thankfully, Jackson had been hired to provide security and was there to watch my back and help me solve this spooky mystery.

As a bonus, you’ll find dozens of natural aromatherapy cures throughout the book that can improve your health. I think you’ll be surprised at how much they can help you feel better in mind, body and spirit. In fact, my good friend Chrystle Fiedler, the author who tells my stories will be sharing aromatherapy tips every Monday at Killer Hobbies (http://www.killerhobbies.blogspot.com) Stop by for natural remedies and giveaways galore!

Until next time, I am yours, naturally,

For a chance to win a copy of Scent to Kill: A Natural Remedies Mystery just post your favorite natural cure in the comment section!

Congratulations to Aurian, the winner of a copy of Scent to Kill: A Natural Remedies Mystery!