Bright Spots among the Clouds 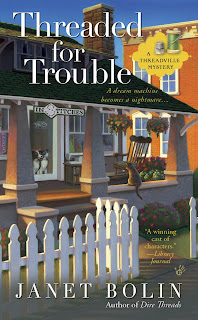 by Edna Battersby from the Threadville Mystery series by Janet Bolin

A baby on her hip, the woman held my shop door open for a pair of girls who looked about three. The mother smiled down at the two little girls, but when she looked up at me, I saw the fatigue in her eyes.

“What can I do for you?” I asked. I sell notions in my little store, Buttons and Bows.

She tilted her head to one side. “Make winter end and spring come?” Even the grin looked tired.

During the night, snow had fallen, and Threadville was charming under its white frosting. But the sun hadn’t peeked out from behind the clouds for days.

And this mother had to bundle up two toddlers and a baby just to go outside for a little fresh air.

The little girls stared with longing at the boxes of buttons, sequins, and crystals arranged floor to ceiling along the wall of one side of my store, and at the ribbons and other trims that I sell by the yard on the other side. They were all too high for the children to touch.

I led the way toward the back sales room. “Come with me.”

I showed the girls a bin full of brightly colored pompoms. “Take off your mittens and feel how soft these are,” I said.

Shyly, the girls looked up at their mother.

“Go ahead,” she said. The baby clung to her and stared at everything with dark, alert eyes. The mother looked at me. “You sell beads, don’t you?”

I showed her the tables covered with open boxes of beads, also too high for children to reach. I gave her a basket, reached out for the baby, and to my surprise, he came, chortling and gurgling, into my arms. While the mother chose sparkly beads, I bounced the baby and recited rhymes I’d hadn’t thought about for about thirty years, when Haylee was about the size of the two little girls.

The mother and I both kept close track the girls, who were in their own little world. Cheerfully chattering to each other, they created a game that involved sorting the pompoms by color and size.

I gave them small paper bags and told them to fill them with their favorite pompoms. By the time their mother had chosen the beads she wanted, the twins had decided on their pompoms.

The mother swished her hand around in her basket of beads and let them fall between her fingers in rivers of sparkling color. “Just seeing and touching them cheers me up.”

I handed her baby back to her. “What are you going to do with them?” She was buying several pounds of expensive beads. 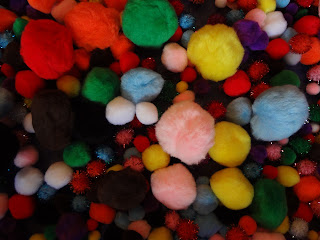 “Make jewelry. How much do I owe you for the pompoms?”

“Nothing,” I said. “It’s the best I could do to make Spring come early.”

“I love the colors,” one girl told me.

The mother hugged the baby to her. “Thank you, Edna. We’ll be back.”

The two little girls called, “Thank you,” again and again as they walked to the door. They were still repeating it as the door closed, and I heard them singing it out on the snowy sidewalk, too.

“Thank you,” I whispered. I hadn’t held a baby for a long, long time, and the memory of the twins’ smiles warmed me like spring sunlight.

What about you? What do you do to relieve the winter blahs?

DIRE THREADS was nominated for both an Agatha Award for Best First novel and for the Bloody Words Light Mystery Award (the Bony Blithe.) You can order DIRE THREADS and THREADED FOR TROUBLE from any bookstore or from these booksellers. Visit Janet at facebook and twitter.

And look what just arrived--the cover for the third Threadville Mystery, THREAD AND BURIED! 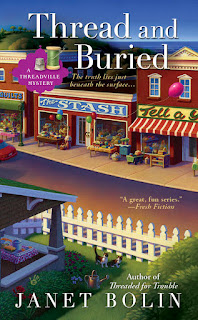 Those colors are enough to cure the blues. THREAD AND BURIED will be released on June 4, 2013, but can be preordered now from your favorite bookstore or online from  Barnes and Noble or Amazon! And the fourth Threadville Mystery is in the works...
Submitted by Janet Bolin