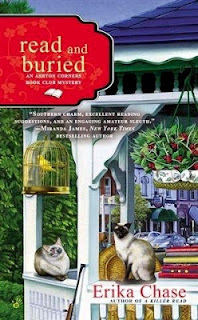 By Lizzie Turner, from the Ashton Corners Book Club mysteries

I’m not very good at keeping New Year’s resolutions. I admit that up front. But it doesn’t stop me from making them every year. Breaking them within a short span of time. And feeling badly about it. Guilt, that’s what it is.

So, I’m feeling a tad better this year after reading recently that the self-control muscle needs to be exercised, just like every other muscle in the body. (One of my resolutions!) However, using it on too many goals means it’s spread too thin. Therefore, something’s gotta give.

I’ve given that a lot of thought. Sure, the resolution about keeping my desk tidier is a necessity, so it has to stay on the list. Cutting back on the number of times I dip into the almond butter is also a necessity (see above resolution re exercising). I’m really set on the one about making more time for my friends, although whenever there’s a murder, it seems I see a lot of my book club friends while we’re involved in solving it.

That brings me to another resolution, no more getting involved in murders around here. Not that there are that many in Ashton Corners, although two within a few months could appear to be too many. And of course, the Ashton Corners Mystery Readers and Cheese Straws Society had to get involved as some of our members were on those suspect lists! But really, I’m a reading specialist, not a cop so no more!

I’ve also got one about going through the rest of my kitchen cupboards and de-cluttering. I had to do the one that got taken out by a rifle shot. So, it’s time to tackle the others.

So, in order to strengthen my willpower or self-control muscle, I need to concentrate on one item to start with.  So, what’s it to be?

Exercising, almond butter, tidying desk, more time for friends, kitchen cupboards or go cold turkey in the murder investigation department.  How about no more indecision? What would you advise?


Read and Buried, the second in the Ashton Corners Book Club Mysteries
is now available!
A Killer Read,  was #2 on the Barnes and Noble Mystery Bestseller List
Visit Erika at www.erikachase.com
Love to hear from you on Facebook and Twitter  @erika_chase.