Gloria Lamerino, Gerry Porter, and Ada Madison from the series by Camille Minichino/Ada Madison/Margaret Grace have a meet-and-greet

It was hard enough for me to keep up with all the murders I had to solve, one for every element of the periodic table, but when my author/manager decided to change her name—twice!—and give me two sibling sleuths to keep track of, I decided it was time for a meet and greet. As the oldest, it fell to me, Gloria Lamerino, retired physicist, to make the arrangements. 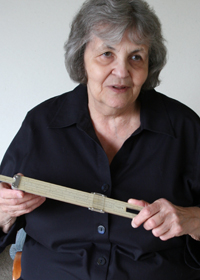 I made reservations at my favorite restaurant: The Periodic Tables. We found each other easily since we'd agreed to wear identifying outfits. I wore all of my signature scatter pins with symbols of the elements, thus making my jacket extremely heavy. Gerry Porter wore her sweatshirt bearing the message, "Little Things Mean a Lot." Sophie Knowles carried a large slide rule that stuck out from her crossword puzzle tote.

It was fairly crowded that day, but we found a corner table and ordered sandwiches and coffee. We were surprised how much we had in common. We were all persistent (stubborn), curious (nosy), and drawn to adventure (murder and mayhem). We bonded immediately.

"We'd never have had a chance to be friends if it weren't for Margaret Grace," Gerry said.

"You mean Camille Minichino," I said.

"I didn't think we'd have anything in common besides our creator," Gerry said. Even seated, Gerry towered over me at five-four and the even shorter Sophie. "You teach math in college," Gerry said to Sophie. I nearly flunked math in high school. I just don't have the head for it."

"Are you kidding?" Sophie replied. "Look at all the measuring and scaling up and down you have to do for your miniatures. I wish I had your artistic talent."

"I heard you're learning to bead," I said to Sophie.

"Yeah, I'm trying to learn to bead better than a fifth-grader. But I can't even make a pretty bracelet for my boyfriend's niece. Gerry's 11-year-old granddaughter probably does better."

"Maddie is special," Gerry said, and we nodded vigorously, though Sophie and I were both glad we didn't have kids ourselves.

"But you're the ingenious ones," Gerry said to me and Sophie. "Anyone who can make sense out of equations is creative in my book." 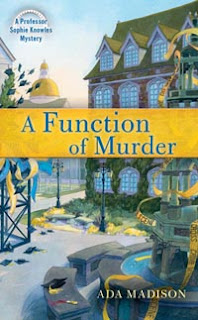 "If you're so non-mathematical, how come you ordered PI?" Sophie asked.

"And you ordered a MINI quiche," Gerry pointed out to me.

"We should have had the cosmic soup," I said.

We laughed as if we were at a comedy club. The restaurant patrons started to stare.
Though it wasn't anyone's birthday, we'd brought presents for each other. We howled as we opened them. I distributed tiny periodic table lapel pins; Gerry gave us miniature pillows that she'd embroidered with meaningless equations; Sophie had constucted Rubik's cubes with our faces on the sides.

We had a great time, talking a mile a minute (not technically), and clinking our mugs together at all the jokes we cracked.

"What does the little mermaid wear? An algae bra," came from Sophie.

"Does a radioactive cat have 18 half-lives?" I asked, proud of myself.

We could barely contain our laughter. Heads turned.

At the next table two older women scanned their menus, eavesdropping on us as we continued to joke and laugh like schoolgirls

We heard one of women address the waiter. She pointed to us and said, "I'll have what they're having."