How to Play the Game of Murder

By Dorothy Parker of the Algonquin Round Table Mysteries, by J.J. Murphy

We members of the Algonquin Round Table love our games. We frequently compete—with almost maniacal fervor—at cribbage, croquet, poker and many other games, not to mention the verbal one-upmanship at our daily lunches. One of our favorite games is Murder. If often begins during a party or cocktail hour, and continues throughout the evening.

What is the game of Murder, you ask?

We start by putting slips of paper into a hat. The person who draws the slip that reads Detective assumes the role of—you guessed it—the Detective. Then we draw the rest of slips in order to assign a Murderer. (The Murderer keeps this information to himself or herself.) Everyone else is a potential Victim.

The Detective goes away, and the rest of us go on with cocktails and small talk, wandering around the hotel or apartment, and generally enjoying ourselves as usual. But, as soon as the Murderer manages to be alone with another player, the Murderer points to the other person and says: “You are dead.” The Victim slumps down, forbidden by the rules of the game to leave the spot of the crime or make any sound until discovered.

When the Victim is discovered, the Detective is called in to begin the investigation. Everyone is a suspect, so the Detective questions each one about his or her whereabouts and who they were with. Every suspect—except the Murderer—has to respond honestly. From these answers and alibis, the Detective must deduce who is lying—and therefore who is the Murderer. It’s a marvelous game. 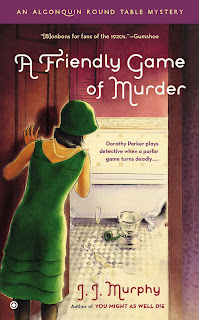 Of course, the whole thing became all too real when we tried to play Murder on New Year’s Eve. A young Broadway starlet turned up dead in Douglas Fairbanks’ bathtub, and then we had to convince Arthur Conan Doyle to help us to investigate-- But you’ll have to read A FRIENDLY GAME OF MURDER to find out more about that.

So, here's my question for you... If you played this game with your friends or family, who would you like to “Murder”?


Dorothy Parker returns (along with Sir Arthur Conan Doyle) in A FRIENDLY GAME OF MURDER, the third book of the Algonquin Round Table Mystery series, now available in print and e-book.