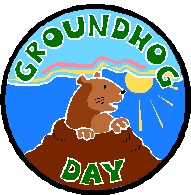 Becky ran to my car from Young's Family Kitchen, an Amish restaurant in Appleseed Creek where she worked as a waitress. Snow flurries whipped around her, and her white blonde braid bounced off her back as she ran. She jumped into the car and shook the snow off her skirts. Even though Becky left the Amish life, she still wore Amish dress as her uniform at Young’s.

She brushed snow off her coat sleeve onto to me. “It’s freezing out there.”

I started the car. “It’s because the Groundhog saw his shadow. There will be six more weeks of winter.”

Becky stared at me as if I just told her I ran into a dragon on the Appleseed Creek square. “What?”

“You know Punxsutawney Phil. He’s a groundhog and predicts if we will have six more weeks of winter or an early spring.”

Slowly, I turned the car onto the county road in front of Young’s. “Sure. Today is Groundhog Day.”

“Groundhogs have a day?” she asked.

“Oh right, you wouldn’t know about Groundhog Day growing up Amish.” I grinned. “We should celebrate. It’s your first Groundhog Day.”

She held her mitten-covered hands in front the heating vent. “How do you celebrate it?”

She removed the Amish prayer cap that was part her work uniform. “Do you believe the groundhog can predict the weather?”

“No, I don’t believe it,” I said. Okay, maybe a little. It is snowing. “But it’s a big deal. Thousands of people gather in this little town in Pennsylvania and stand in the freezing cold to see if the groundhog will see his shadow.”

“Are you making this up?”

She shook her head. “So the English think the Amish are backward, but the English make their weather predictions based on a rodent’s shadow.”

I slid to a stop at a stop sign. “Well, it doesn’t sound as fun when you put it that way, but yeah, that’s kind of true.”

I laughed. “That’s not the first time you’ve said that.”

She grinned. “And it won’t be the last.”