TROUBLE IN THE TAROT by Kari Lee Townsend DEBUTS March 5th!
My name is Morty and I have to tell you, my author is a freak when it comes to Reality TV shows. She watches the Bachelor and the Bachelorette because she can't seem to stop being an incurable romantic. She loves a great adventure like the Amazing Race, even though she'd probably kill her husband if they were ever partners. She thinks Survivor is awesome, but she knows she could never handle the bugs and critters. She loves watching the drama unfold on Big Brother, and thinks she could do well since she plays a mean social game. But alas, all of these shows take you away from your family for weeks at a time. As tempting as that sounds to her, she has deadlines galore and 4 kids still living at home. That's a reality show in itself...trust me, I've met them. My point is, just the other day, I read her email...hey, I'm a mischievous cat after all...and came across what sounds like the perfect mix of a social game and solving mysteries which she loves. Here's the 411...

ABC has a brand new reality TV show airing this summer. It's called Whodunnit, and is basically 13 people living in one house, trying to figure out whodunnit week after week. It's like CSI meets Clue. The details are below for anyone who wants to apply. 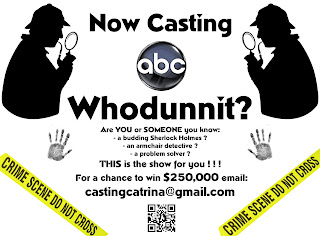 Are you a budding Sherlock Holmes looking to put your amateur crime solving skills to the test? Do you always figure out the ending before everybody else? Have you always seen yourself as the main character in mystery novels?

From the creator of CSI, Anthony Zuiker, and 51 Minds comes a brand new mystery reality competition for ABC. We are currently scouring the nation for armchair detectives, perceptive problem solvers or anyone who believes they have the mental acuity to go up against other like-minded sleuths for $250,000.  This show is for everybody from ex-detectives who’ve solved crimes all their lives, to a mother of three who has to figure out when her children are lying or where they hid her keys.

If you or anyone you know fits the mold of an ASPIRING GUMSHOE then APPLY today. You MUST be at least 21 years old and a legal US resident to be eligible.

For more information and complete eligibility requirements visit ABC.com/Casting or email us at WhodunnitCasting@gmail.com -include name, age, phone number, brief description of yourself, why you think you would be a great crime solver and two (2) recent photos.  Make the subject line your current city and state.  All submissions become property of producer.  Good luck.

If you think you’re good at picking the killer on TV crime shows, this is the reality series for you. ABC has ordered a new unscripted show from the creator of the CSI franchise called Whodunnit? The show puts 13 contestants’ investigative skills to the test in a mystery competition from producers Anthony E. Zuiker (CSI) and Cris Abrego (Rock of Love).

Here’s the official description: “Each week players will use a variety of crime scene investigation techniques to meticulously uncover evidence that will ultimately reveal who among them is the killer. The interactive series will pit 13 amateur sleuths against each other in a quest to solve a series of puzzling murders. Some will form alliances and others will choose to go it alone just to get them closer to the grand prize. The contestants will reside in a glamorous estate where each week they must solve a new crime in order to advance in the game. Failure to solve the crime will lead to each player’s demise until only three are left standing. In the final episode, only one player will unmask the killer and take home the $250,000 prize.”
The show could be described as “CSI meets Clue.”
Said Zuiker in a statement: “I’ve built a career telling crime stories, and if there is one thing that I’ve learned, especially from “CSI”, it is that the audience loves to solve the mystery. Whodunnit? allows everyday fans to be in the show themselves, and get the chance every week to do what they love best, which is ultimately solve the case.”
Added Abrego: “The mystery fans who suddenly find themselves in the middle of an unfolding murder mystery won’t actually be playing for their lives, of course, but they’ll certainly feel like they are, and it promises to be just as engaging, and suspenseful, for the viewers at home.”
Whodunnit? will premiere this summer on ABC.
So tell me.....who's going to apply? Please someone...anyone...apply so my author will stop driving us all  nuts and focus on solving her own mysteries. And if any of you get on, let me know. I might just have to hitch a ride in your suitcase. I always know whodunnit ;)

Stay tuned for info on TROUBLE IN THE TAROT'S upcoming blog tour with lots of giveaways!