There's a spy in the garden! 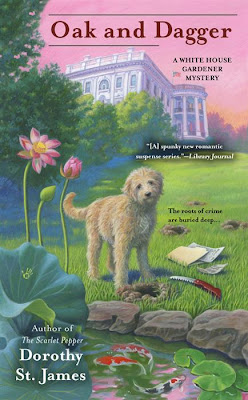 Casey Calhoun, our assistant gardener, is at it again. This time I don't know what to think. There's talk of spies and mysterious holes are popping up in the White House lawn. And now there's a dead body in the Children's Garden!

The press are having a field day with the "Murder at the White House" headlines already. I don't need Casey stirring the pot with the rumors that there's a spy on the loose. It really is too much. I have events to plan and no time to be putting out these kind of fires that seem to always start to flame in her gardens.

This isn't the first time that she's gotten a crazy idea in her head. Just this past summer she was convinced that the President's own press secretary was hiding secrets and was perhaps a murderer. (THE SCARLET PEPPER)

Well...to be honest...she wasn't completely wrong about him.

But a spy? In the White House? That's ridiculous! Impossible! Isn't it? But what if she's right? What if there is a murderous spy hiding in plain sight among us?

It really is too much to think about. Some days (like today) I wish I had stayed in bed.

What do you dread on Mondays?


Find out all about the spy in the White House in April when OAK AND DAGGER is released by Berkley Prime Crime. Pre-order your copy today!

Praise for FLOWERBED OF STATE (book #1 in the White House Gardener Mysteries):
"Credible characters, a fast-paced plot, and a light look at political life in Washington, D.C., will delight cozy fans." ~ Publishers Weekly

Praise for THE SCARLET PEPPER (book #2 in the White House Gardener Mysteries):
"A potboiler of homicide, blackmail, journalism, power and sex - but one that St. James handles with taste as well as verve - “The Scarlet Pepper” fulfills the promise of last year’s series debut, “Flowerbed of State,” and then some." ~ Richmond Times-Dispatch