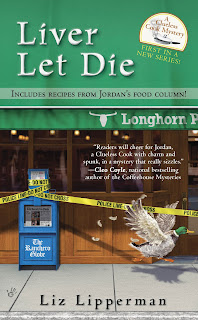 Did you ever look back on your life and want to just slap yourself?  Yeah, that pretty much describes how I felt explaining to my editor at the Ranchero Globe why I ended up in a small town fifty miles north of Dallas writing personals when I’d graduated several years before at the top of my class with a journalism degree.

Three words—a cheating fiancé. I didn't need the editor to remind me how stupid I'd been to put my own dreams of becoming a big-time sports reporter on hold while I followed the jerk all over Texas and watched his dream become reality.

So, here I am in Ranchero, Texas, writing personals and helping desperate women hook up after reading some redneck’s lies about himself. Loves to dance? Right. Probably doesn't have a job, either and still lives with his mother—thinking Norman Bates here. Needless to say, my expectations of ever being in another relationship were in the toilet.

I was beginning to think I would have to crawl back to Amarillo and listen to my parents and four brothers tell me they told me so—until my editor called me into his office. Seems the culinary reporter had been in a ski accident and would be out for six weeks rehabbing both a broken hip and arm. Needless to say, I jumped on it, despite the fact I couldn't cook myself out of macaroni and cheese box.

Did I mention my four older brothers? They’d needed me to even up the sides every day after school when they played flag football with my dad in the front yard.  Granted, I can throw a razor-sharp touchdown pass from fifty yards out, but I have yet to cook a grilled cheese sandwich without burning it. Consequently, my diet consists of fried bologna sandwiches, fast food, and Hostess Ho Hos, which I equate to Prozac.

How hard would it be to write about food as long as I didn't have to actually cook it, I thought.  No sooner had I signed on the dotted line—why, I'll never know since the man informed me there would be no increase in my already measly salary, and I still had to write the personals—that I began having serious second thoughts.

Then the editor informs me my job also includes an occasional restaurant critique, and in fact, my first one would be that night at a newly reopened steakhouse on the outskirts of town. Now might be a good time to tell you I hate steak and all fancy food. Since I had the sinking feeling I wouldn't see nachos and mozzarella sticks on the menu, I prayed at least there would be chicken.

Wearing hand-made jewelry and carrying a borrowed purse from Rosie Larue, my hippie neighbor who sold the stuff on eBay, I knew immediately after scanning the menu that I was in trouble.

"What on here isn’t red meat?" I asked the hunky waiter, explaining I was watching my cholesterol.

"Foie gras," he said. "I've never tasted it myself, but that guy over there orders every week. At this price, it has to be good."

I figured since I wasn't getting a boost in my salary, the newspaper could cough up the extra bucks for my meal. But as soon as the waiter set the plate in front of me, I knew I had made a big mistake. There was no way I could eat the foie gras, especially after hearing it was really fatty duck liver. When I thought no one was looking, I shoved the entrée into Rosie's purse, thinking I had just pulled off the con of the century.

This is from the first book in the Clueless Cook Series and gives y’all a look at the main character, who is very much like me. Well, unless you mention that she’s skinny and has great hair…and she’s young! Sigh! I meant we have the same eating habits. I grew up eating fried bologna and casseroles. As a matter if fact, most of the recipes in the back of all three books in the series are my own. And although I have never slid any yukky food into my purse, I have spit stuff out in a napkin.


What about you? What do you do when you eat something that you know you can’t swallow? Do you act like a grown-up and swallow it anyway?
Submitted by Liz Lipperman